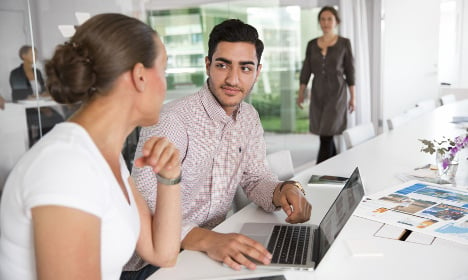 One of Sweden's centre-left coalition's goals is to push down unemployment to the lowest rate in the European Union by 2020. But the bid has been slammed as a pie-in-the-sky dream by some critics, as Sweden continues to battle a jobless rate which has stuck stubbornly at around 8.0 percent in recent years.

“The jobs market is relatively strong. The growth of new jobs is good, but this has still had quite a weak effect on unemployment,” said the minister. Her proposals follow a series of talks with industry experts to find ways in which to get newly arrived foreign professionals on to the jobs market quickly, to plug holes where there is high demand for skilled workers.

“It feels completely insane that these highly competent people arrive and we can't get them out on to the jobs market,” Johansson told reporters at a press conference.

READ ALSO: 'Sweden must be able to attract global talent'

The plans, which are set to be rolled out in 2016, are still being drawn up and how they will look depends on the industry concerned. But in theory, a doctor waiting to get their foreign certificate validated in Sweden could perhaps seek employment as an assistant nurse in the meantime. And a chef who speaks English could start working while learning Swedish.

But the scheme is unlikely to create large volumes of new jobs, said Johansson, although she did not want to offer an exact estimate. However, on the whole the unemployment rate, which is currently at 7.8 percent, is expected to fall to 7.5 percent this year and 7.3 percent in 2016.

It followed figures released by Sweden's Employment Service (Arbetsförmedlingen) in November 2014 which suggested it is already getting easier for foreign-born graduates to find a job in Sweden.

The service reported that 71 per cent of graduates born outside of Europe and living in Sweden were working in 2013, compared to just 58 percent in 2005.