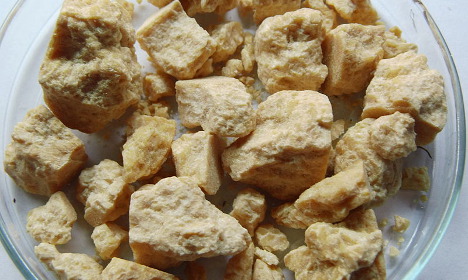 The amber rock was in fact a large piece of trotyl, pictured. Photo: Daniel Grohmann

It is not often the Swedish Amber Museum (Bärnstensmuséet) in the small fishing village of Kämpinge in southern Sweden welcomes a police bomb squad.

But on Tuesday that is exactly what happened, after one of the museum's exhibits was found to be a large trotyl, or TNT, bomb from the Second World War.

“I am happy I got rid of it. I feel relieved,” museum owner Leif Brost told regional paper Trelleborgs Allehanda. Amber is fossilized tree resin and is often used as a gemstone in jewellery.

The two-and-a-half kilo rock originally came into Brost's hands around a year ago when a fisherman who had dredged it up from the Baltic Sea brought it in, thinking it was a large amber rock.

“I didn't know what it was. The fisherman thought it was perhaps amber, but it weighed twice as much. I thought it was maybe a phosphorus bomb or perhaps mustard gas and that it might self-ignite,” Brost said.

On Sunday he showed a picture of the mysterious rock at an information event on dangerous waste organized by the local council and was told to contact the police, who sent their bomb squad on Tuesday.

“I have just got the answer that it was a trotyl bomb and that it wouldn't have been able to self-ignite. But it feels good that it's gone,” Brost added.

It is not the first time strange historical artifacts have popped up in southern Sweden. Last year a woman told The Local of her shock when she stumbled upon 80 skeletons stashed away in blue Ikea bags in a church.