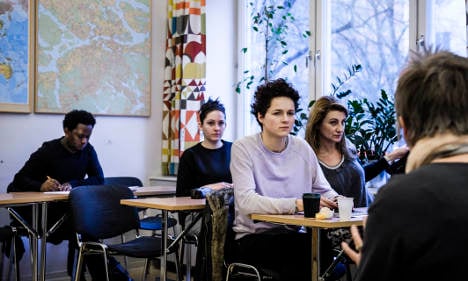 Asylum seekers and other foreigners are entitled to free SFI (Swedish for Immigrants) lessons under Swedish law.

But according to the Red Cross in Sweden, too many immigrants are facing a wait of “several years” before they are granted a place in class.

The charity says that asylum seekers in particular are facing long delays in securing the documents they need before they can start SFI lessons: a residency permit and proof of a permanent address in Sweden.

“Language is the key to getting into the Swedish society,” Ulrika Årehed Kågström, Secretary General of the Swedish Red Cross told broadcaster SVT on Tuesday.

Referring to the current waiting time for lessons for many immigrants, she added: “Resources are not sufficient and therefore the government needs to put more resources in order to make it work”.

Her comments followed a survey by the Red Cross and polling firm Novus which suggested that three out of four Swedes want asylum seekers to start learning Swedish as soon as they arrive in the Nordic nation.

The Red Cross is one of several charities in Sweden which offers separate language training for asylum seekers, but it is calling on the government to promote a greater compliance with the law to guarantee Swedish lessons for all new arrivals.

“As an asylum seeker you have to get started with the language immediately, and this is also how Swedish people seem to view it,” said Årehed Kågström.

Sweden takes in a bigger share of asylum seekers than any other EU member state, when compared to existing population size.

Around 9.6 million people live in the Nordic nation and asylum was granted to more than 33,000 refugees last year.

To cope with the increasing flow of refugees, the Swedish Migration Board announced in March that it has more than tripled the maximum number of residents allowed at each asylum centre in the nation from 200 to 650.

The country’s open approach to immigration remains a hot topic, with centre-right opposition parties now mooting the idea of moving towards temporary residency permits rather than permanent asylum.

Sweden's anti-immigration party, the Sweden Democrats, secured almost 13 percent of the vote in last September's general election and is pushing for even tougher limits on immigration.