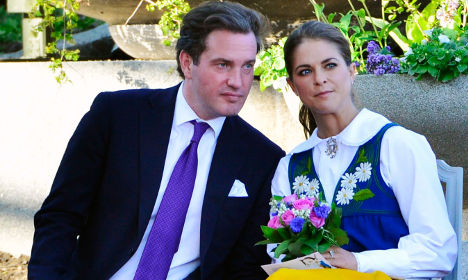 Madeleine, 32, and O’Neill, 40, had announced in February that they planned to stay in Sweden for the foreseeable future with their new baby and their one-year-old daughter Leonore.

The princess told Swedish media at the time that she no longer wanted to live so far away from her relatives in Sweden.

According to registration documents submitted by the royal to the Swedish tax agency, and obtained by newspaper Expressen, when explaining the reasons for her move back to Sweden she ticked the alternative “I'm going to live in Sweden” and when specifying the length of her stay chose “permanently”.

However, the Royal Court confirmed on Wednesday afternoon that the royal couple are planning a move to London.

“The whole family intends to move to England at some point in autumn. (…) The plan has always been that the family eventually would move on. Chris' business is mainly in England,” press spokeswoman Margareta Thorgren told Swedish tabloid Aftonbladet, which broke the story.

O'Neill's mother Eve O'Neill lives in central London, while his sister Tatyana is based on an eighteenth century estate just outside the city.

The royal couple, who are currently living in an apartment owned by Sweden's royal family in central Stockholm, are meanwhile preparing for the imminent birth of their second child.

It was the Queen herself who let slip the month during a state visit to Finland earlier this year.

“We look forward to it so much and also to the wedding in June,” she said and added she hoped the two royal events will not clash, as Prince Carl Philip is set to tie the knot with his fiancée Sofia Hellqvist on June 13th.

The Royal Court had previously revealed the Princess is due to give birth in summer, but the month of the expected delivery had not yet been formally announced.