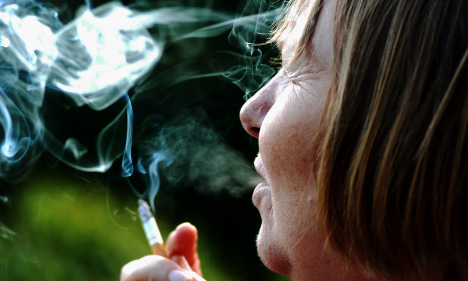 Sweden was one of the first countries in Europe to ban smoking in restaurants, bars and cafes around the country, almost exactly ten years ago.

The idea of extending the ban to include places such as outdoor terraces has been repeatedly discussed in the Nordic nation and in October 2014 Sweden's Public Health Agency (Folkhälsomyndigheten) revealed its full proposals for new limits, to be considered by the government.

Now, top Swedish lawyer Göran Lundahl has been tasked with checking out how such a law might be worded and how this would fit in with the latest EU Tobacco Products Directive, which was approved by the European Parliament in February 2014 and aims to further limit smoking across member states.

Lundahl’s research is set to be completed by March 1st 2016 but he told Swedish broadcaster SVT on Wednesday that he was hopeful that a ban on smoking in outdoor restaurant areas could work.

“It won’t be so difficult technically to extend the smoking ban to outdoor dining. However, it is a little more difficult when it comes to things such as sidewalks outside entrances. But we pondering on this and hope that we can come up with a scheme that works,” he said.

Meanwhile the broadcaster says it has information which suggests that a majority of politicians from across the political spectrum will support a ban on smoking in outdoor eating areas.

YOUR VIEWS: Should outdoor smoking be banned in Sweden?

Repeated polls suggest that most Swedes back the idea of an extended smoking ban, with young people especially in favour of the plan.

“It's about time to make public places free of cigarette smoke,” the head of Sweden's Public Health Agency Johan Carlson said last year when announcing its push for a ban.

“Many people are uncomfortable with cigarette smoke and it can even trigger breathing difficulties for asthmatics.”

Lung cancer groups in Sweden made headlines in 2013 after proposing that the country should have a total smoking ban by 2025.