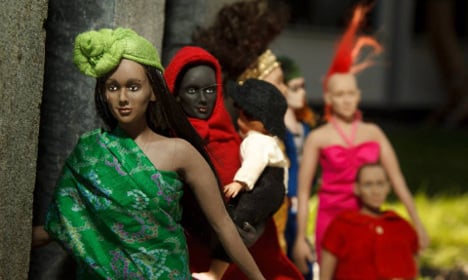 It all began when Julia Taube's relatives sent her daughter a Barbie doll for Christmas two years ago.

“They wore heavy make-up, were quite thin and it was clear that they were stereotypical girls' dolls, not something my son would have received,” the Swedish mum told The Local on Wednesday.

“The thought had never struck me before, but I suddenly noticed that the children played in very different ways with these dolls and I thought 'how does this affect them?' Why should my son have dolls with large muscles who can fight and my daughters pretty dolls that you dress up?”

Taube, 35, put the toys away and started looking for alternatives, but struggled to find anything she liked. Eventually, she decided to take matters into her own hands and created 'MyIDolls' — dolls in all shapes and colours with all the body parts you would expect to find on a live human being, including breasts and pubic hair.

“I have painted before and thought sculpturing seemed like fun, so I sat down and started to experiment. I want them to be anatomically correct, that they should have genitals and look like people do. And I want them to represent as many different people as possible,” she said. One of the Julia Taube's anatomically correct dolls, left, with a Barbie doll. Photo: MyIDolls

But even in Sweden, a country known for its openness and gender neutral ideals, Taube's venture has faced opposition.

“I've received some negative comments. But I promise that I won't force the dolls on anyone, buying them is completely voluntary,” she said.

“I think that maybe it frightens people, as change generally does. It's like when the word 'hen' arrived [a controversial gender neutral pronoun which recently entered the Swedish dictionary]. How can people be so opposed to a word? It is completely impossible that it could harm anyone,” she added.

If all goes according to plan the dolls will hit shops in autumn. But Taube's own children, two girls aged 4 and 6, and a boy aged 8, have already started playing with the new toys.

“It's been fun. I can really tell that when they got my doll it changed the way they were playing, with more room for imagination. The same doll can be a superhero and a ballerina, you don't have to choose,” she said.