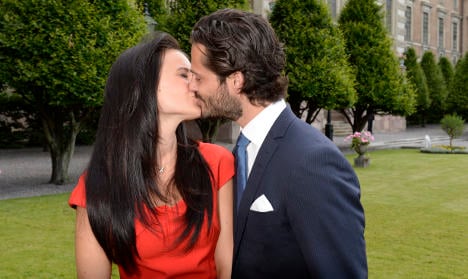 1. They met in a nightclub

The couple are set to wed in a fancy ceremony at the Royal Palace in Stockholm this June, but they first met in one of the city's night clubs. Okay, it wasn't exactly a cheap spot (it was chandelier and velvet-filled Sturecompaniet V in the classy Östermalm district, which has a strict guestlist). But let's not dwell on the facts — Prince Carl Philip's fiancée found her man while (possibly) dancing around her handbag, providing hope for all single women searching for a Prince Charming (yes we know we're not supposed to write things like this in 'gender equal' Sweden).

The pair didn't actually meet again until two years later, this time in Båstad, a small town on the Swedish west coast that turns into one big party every summer during the Swedish Open tennis tournament. Prince Carl Philip and Sofia Hellqvist were reunited in the VIP section at Pepes Bodega, a club located right by the beach with stunning ocean views. At first they snuck around and tried to keep their romance hidden, but during a New Year ski-trip to Sälen in 2010 they were spotted holding hands and went public about their romance soon afterwards.


People queuing to get inside the popular nightclub where the famous first met. Photo: Krister Larsson/TT

“It’s very strict — many rules and many people that you didn't know. A bit hard, a bit lonely.”

This is how 16-year-old Prince Carl Philip described his boarding school Lundsberg in a documentary for Swedish television channel TV4. That's despite being duke of the region the elite establishment is based in (Värmland).

Sweden doesn't really do private education — there are only a few traditional boarding schools in the country — and since the Prince graduated in 1999, his former school has had its reputation dented following a scandal involving 'hazing' initiation rituals which caused it to briefly close down after two boys were burned with irons.

3. She has an incredibly colourful past

After starring in Sweden’s version of the US beach-based reality television show 'Paradise Hotel' in 2005 and subsquently appearing on the cover of gentlemen’s magazine Slitz, Sofia Hellqvist gained a reputation as a party girl in her home country before relocating to New York.

While in the US she studied accounting and business development at the Institute of English and Business and became a yoga instructor. But she still found the time to hit the city's club scene and a secret blog of her adventures alongside best mate Camilla Sundman was recently discovered by Swedish tabloid Aftonbladet, before being swiftly taken offline.

One of the transcripts published by the paper read: “To be a woman in NY is an advantage. Don’t take this the wrong way, but here the men aim to please”.

In the blog, the girls also shared stories of partying with celebrities including Mark Wahlberg: “He was calm and laid-back! We weren’t. We had fun with our crew, sang karaoke and rocked standing on the sofas”.

When asked about her colourful past in 2013 the bride-to-be told Swedish broadcaster TV3: “I wouldn’t have made the same choices today. That’s for sure. But I have a hard time saying that I regret anything in my life.”

As well as being a prince, Carl Philip is also a talented designer and he has designed stylish pieces of silverware, ceramics inspired by endangered Swedish insects and even worked on a linen collection for Swedish department store Åhlens.

The Prince studied graphic design at Forsbergs skola in Sweden and Rhode Island School of design in USA, where he won a contest designing a new logo for a prestigious history museum, Martha's Vineyard Museum.

But his career has not been without controversy. In 2013, he was accused of plagiarism, when designer Eric Ericson claimed that he had created a fireplace screen said to have been the work of the prince three years earlier. The prince later told Swedish newspaper Expressen that Ericson had in fact co-designed the fireplace screen with him, but he had chosen not to be named at the time.

“Aside from my important prince role, I invest all my time in this [design] and I will continue to do so,” he told the paper.

He appears to have stuck to his promise and his latest spring venture is a collection of bowls and vases for Danish brand Stelton, designed with partner Oscar Kylberg.

5. She lives for her charity

Since retiring from Sweden's party scene, Sofia Hellqvist has committed herself to charity work. In 2009 she went on a two-month trip to Ghana where she helped build women's shelters and visited orphanages.

In 2010 she founded the nonprofit organisation Project Playground together with Swedish model Frida Vesterberg. The organization aims to help underprivileged children and teens in poor areas around Cape town in South Africa through activities such as football, dance and drama.

In a recent documentary for Swedish television channel TV3 she said it was a shame that many people did not know about the organization and admitted she has a hard time coping with media coverage focusing on other aspects of her career.

“Project Playground is my family, my children, it fills my entire life. It’s the proudest [thing] I have in my whole life,” she said.

6. He struggles with dyslexia

Prince Carl-Philip has openly talked about his struggles with reading and writing.

Dyslexia is genetic and runs in the royal family — his father King Carl XVI Gustaf and sister Crown Princess Victoria are also dyslexic.

“I got red marks constantly. To read out loud before the whole class was a real pain,” the Prince said of his experiences at school in a recent interview with Swedish broadcaster TV4.

He also spoke about dyslexia after his appearance at Swedish sports gala (Idrottsgalan) in 2013, when he stumbled when announcing one of the winners. The blunder caused a stir in the press with the prince saying “it was a terrible feeling, having media portray me as stupid and unintelligent.”

In March 2015 the prince put his experiences to good use by helping to organize a major public conference about dyslexia in the hope that it would be a step towards finding new ways to help children experiencing reading and writing problems.