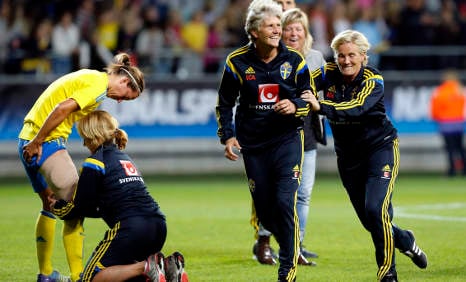 The Fifa Women's World Cup kicks off in Canada next week and it is a big deal for Sweden, where the team's football games and results are regularly shown on mainstream television channels and the squad is in with a chance of winning the tournament, as its coach Pia Sundhage recently told The Local.

TV4, the broadcaster with the rights to the Canadian contest wants to demonstrate its support of gender equality by calling the competition simply 'VM i fotboll' (VM is short for Världsmästerskap, which means World Cup).

But Fifa has warned the channel that it could be in breach of contract unless it uses its preferred full title, the 'Fifa Women's World Cup' (or 'FIFA dam-VM' in Swedish).

TV4's Head of Sport Fredrik Olofson told The Local that his production team wanted “to send the signal that we look at it [the contest] as a World Cup – give it an equal status to the men's World Cup”.

He said that the channel was holding “ongoing discussions” with Fifa about the issue along with Norwegian public broadcaster NRK, which is also in favour of a more gender neutral description of the contest.

But he added: “We don't work in ways which threaten one another.”

“I think we both really want the same thing, and that is to increase the status of womens soccer. Fifa at the same time wants to be clear about their brands which is understandable. But I'm sorry they haven't seen the upside of our suggestion as a strong signal of how we should look at soccer as one sport,” he said.

Meanwhile one of the country's top sports journalists and bloggers Patrik Ekwall turned to Twitter to express his outrage.

Sweden player Nilla Fischer, who is based in Wolfsburg, Germany, tweeted: “I am going to play the World Cup anyway, and nothing else!”.

It is the second time this week that Swedish women's football has caused a stir. On Tuesday the team launched their new slogan for the contest in Canada, using the hash tag #klappaförsverige and an unfortunate translation #clapforsweden.

'Clap' in English is another word for gonorrhoea and the side later said it would look into another more family friendly phrase.

Meanwhile Fifa remains in the global headlines amid claims of corruption surrounding the bidding process for the (men's) World Cup tournaments in 2018 in Russia and 2022 in Qatar.

Fifa's President Sepp Blatter said on Wednesday that he welcomed investigations into the scandal by both US and Swiss authorities saying they would “help to reinforce measures that Fifa has already taken to root out any wrongdoing in football.”

Reacting to the allegations, Olofson told The Local that he felt the sporting body would struggle to regain global respect following the allegations.

“Rebuilding the trust will be a huge issue and will hopefully force the push of a new and democratic movement that football needs and deserves,” he said.