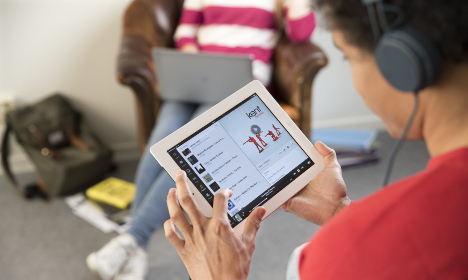 A child with a mobile device. Photo: Susanne Walström/imagebank.sweden.se

Every week, SVT's kids' show 'Rea' sends a question via text message to 60 children voluntary 'mobile reporters' aged between 10 and 13 who then answer the query on camera.

This week the junior reporters were asked to name their favourite ice cream, but a typo in the text message instead directed the youngsters to a web page featuring a video of two men having sex and the words “gay sex is the answer”.

“Our daughter didn't have a phone of her own when she registered as a mobile reporter, so the message was sent to my phone. I'm happy she didn't have to see it, but I could imagine that many have seen it anyway without having asked for it,” the parent of one 12-year-old mobile reporter told Swedish newspaper Dagens Nyheter (DN) on Friday.

SVT quickly realized what had happened and sent out a new SMS with the correct link. It also phoned and emailed the parents of the 60 mobile reporters to apologize for the incident.

“They have been very grateful for the way we've handled this, that we've personally called everyone to talk. We've also been in contact with Tumblr where the video clip was published,” SVT's communication director Sabina Rasiwala told DN.

She added that human error was responsible for the mishap.

“When the link, which is a shortened version of the web address, was copied into the SMS the letter 'f' was missing from the end, which brings you to a closed-down Tumblr account with inappropriate content. It all happened a little too fast,” she said.