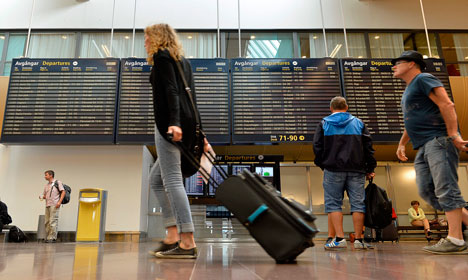 Under the preclearance system, the US passport control and customs service will set up facilities in Arlanda and international travelers will undergo checks there instead of after landing in the United States.

Sweden’s is one of nine countries where the United States has recently decided to set up these so-called “fast lanes.”

“Arlanda was chosen because it meets many of our requirements,” US Ambassador to Sweden Mark Brzezinski told the Dagens Nyheter newspaper. He said Arlanda had a high technical standard, a good administration and that the Swedish government had expressed enthusiasm about gaining preclearance status.

“It will simplify travel, reduce waiting times and the pressure in our arrival terminals, and increase security,” he added.

Swedavia, which operates all airports in Sweden, sent a letter of interest about the preclearance plan to the US last year. The US government then began an assessment of the applicant airports to decide which airports to begin formal negotiations with.

Those negotiations are set to begin soon and expected to last from 12 to 18 months. The preclearance procedures could be introduced shortly after that, Brzezinski said.

Swedish Enterprise Minister Mikael Damberg had fought hard to get preclearance status and said he was very satisfied with the American decision. He did say there were still legal challenges ahead.

“American border control procedures will be carried out on Swedish soil, so we have to straighten out the rules that will apply,” he said. “It will likely demand new legislation so there is serious work to be done.”

But he said the advantages to preclearance status were clear, not only for travelers but for Sweden’s competitiveness within Europe.

The US preclearance system is currently in place in only two airports in the EU, both in Ireland.