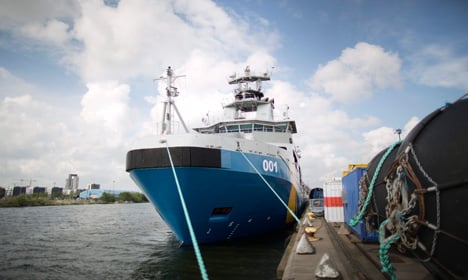 The Poseidon set sail from Gothenburg and has now arrived in the Mediterranean. Photo: TT

Sweden’s participation in operation Triton comes as the Mediterranean migrant crisis reaches new heights. More than 5,000 people trying to reach Europe have been saved from boats in distress in the Mediterranean since Friday and operations are currently underway to rescue another 500, European Union authorities said on Sunday.

In an interview with Swedish Radio, commander Peo Allard said that the Swedes on board Poseidon had never undertaken a mission quite like this one, but had been trained and mentally prepared at home.

The Poseidon has been kitted out with special equipment in order to take on a large number of migrants. The ship has portable toilets and private rooms for women and children. Sails have been put up to create shade for protection from the Mediterranean heat.

The Swedish government announced more than a month ago that it was prepared to send surveillance ships to the Mediterranean as the humanitarian crisis there continued to grow.

Before the Poseidon set out on its mission from Gothenburg on May 21st, Home Affairs Minister Anders Ygeman spoke of what motivated the government to participate.

“It is the suffering we are seeing in the Mediterranean where thousands of people risk their lives in flimsy vessels,” he said.

“It was obvious to the government that Sweden should help.”

Sweden sent planes and ships to the Mediterranean in 2009, 2010 and 2013 to help spot migrant boats and has contributed twice to the anti-pirate mission Atalanta off the coast of Somalia.

Operation Triton is being run by Frontex, an EU agency that manages cooperation between national border protection agencies to cut down on illegal immigration and human trafficking.

Sweden will participate in operation Triton until the end of August.