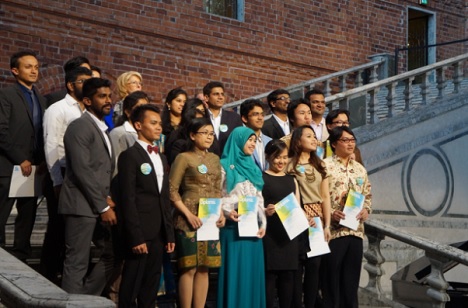 The annual diploma ceremony was held in the famous Blue Hall, where the Nobel Banquet is held each year, in the Stockholm City Hall.

"So tonight we can all feel what it's like to be Nobel Prize winners!" Kurt Bratteby from SI exclaimed, opening the ceremony.

SI Director General Annika Rembe then gave an opening address, offering congratulations to the SI students – now alumni – and reminding them why they are special.

"You were all chosen because we believe you can make a change," she said. "You are important to us, and to each other."

Annika Rembe pointed out that Sweden is a small country – just 0.15% of the world's population. And being such a small country means that ties with other countries are of the utmost importance.

Isabella Lövin, the Swedish Minister for International Development Cooperation, confirmed Rembe's statements, saying that not just Sweden but the world needs SI alumni. One percent of Sweden's gross national income goes to development aid, but that is not enough to change the world. Human action is needed, she said.

"As global leaders, the world is counting on you to act," Lövin said. "Seize the moment and create a better world."

"I feel like a disco ball!" she exclaimed exuberantly.

"I can still remember the day I landed in this land of innovation, where future leaders are born," Iftekhar said. "The title SI Scholar is a glorious crown on my forehead. It is the opportunity to change the world. The crown will always remind us of our duties as future leaders, no matter where we are."

The students were then invited to join Annika Rembe on stage for group pictures, and the evening concluded with a buffet and music.

Programme from the SI Diploma Ceremony 2015

Minister of International Development Cooperation of Sweden and co-chair of the International Dialogue on Peacebuilding and Statebuilding. Former member of the European Parliament for the Green Party with positions in the committees of Environment, Development and Fisheries. Also former member of the Delgation to the ACP-EU Joint Parliamentary Assembly and the Delegation for Relations with the Pan-African Parliament.

Recipient of many environmental prizes and awarded the Fair Politician of the Year in 2012, from Fair Politics EU, for her efforts to make the European Union's Common Fisheries Policy more fair towards developing countries. Until 2009 acclaimed journalist and author of the book Silent Seas – The Fish Race to the Bottom.

Want to see many more pictures from the event? Click here

Would you like to share your reflections from the year or the diploma ceremony? Get in touch!