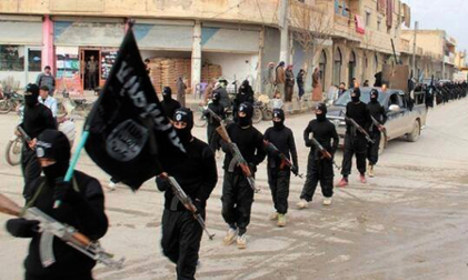 Isis fighters in Syria in 2014. Photo: TT
The man arrested in Örebro is understood to be in his 40s and is accused of recruiting people to the terror organization, while Säpo said in a press release on Monday that the second suspect was believed to have been involved in “terrorism training”.
Sweden's Security Service added that the raid in Örebro followed an investigation into “ongoing radicalization and recruitment” in the city as well as in nearby Eskilstuna.
Säpo's statement said that mosques as well as “cafes and other meeting places” had served as a rallying point for would-be Isis membersin central Sweden.
It called on people living in the region to come forward if they suspected extremism in their neighbourhood.
“We want to encourage more people to get in touch with the Security Service and tell us about suspected terrorist activities, especially in the Örebro area. Örebro is, after Malmö, Gothenburg and Stockholm, the city where most people have travelled from to join violence-promoting Islamist extremist groups,” read the news release.
“It is important that community stakeholders such as municipalities, religious communities and cultural groups stand up towards those who want to attract young people to go to war for terror organizations… in the end it is human lives that are at stake,” it concluded.
READ ALSO: Why Swedish girls are joining Isis
In April Sweden's Security Service (Säpo) told The Local there was “very little” it could do to stop people travelling to Syria to join al-Qaeda inspired groups, as EU officials estimated up to 6,000 people from across Europe have now fought in the war-torn nation.
It confirmed that at least 150 Swedish residents were known to have been to Syria or Iraq to fight for Isis or other extremist groups, with intelligence suggesting that at least 35 had died in the process.
Days later, Syria’s President Bashar al-Assad told Sweden’s tabloid newspaper Expressen that he believed some of “the most dangerous leaders of Daesh and Isis in our region are Scandinavian”.
More than 215,000 people have been killed in Syria's four-year war, which is increasingly dominated by jihadist groups. The fighting started after pro-democracy protests against President Assad's government became violent and the country slid into civil war.