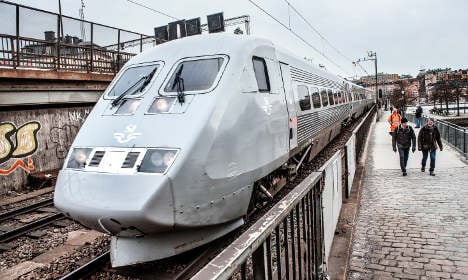 SJ said on Tuesday it will not run its X2000 trains between Stockholm and Norway. Photo: Tomas Oneborg/SvD/TT

Today, two daily trains run from Stockholm to Oslo and vice versa. But on August 9th, SJ had been planning to launch its high-speed flagship X2000 train on the line with three departures a day between the two cities.

By cutting journey times from six to four-and-a-half hours, the company had hoped to attract some of the business travellers commuting between the two capitals, who today mostly choose to fly.

“This was supposed to have been the beginning. Our plan was to increase traffic with more trains if the bid worked well,” SJ chief executive Crister Fritzson told the Dagens Nyheter (DN) newspaper.

But with only two months left to the launch, SJ said on Tuesday that the tens of millions kronor venture will not go ahead. The reason, it said, was that Norwegian Jernbaneverket, which manages the country's railway network, at the end of March had announced plans to change overhead cables on the Lilleström-Kongsvinger line over the next two-and-a-half years.

The work would take place between 9am and 2pm, which SJ said meant it would not be able to run its two most important departures: the morning train from Stockholm and the noon train from Oslo.

“Jernbaneverket's announcement so close to the start of traffic was a cold shower and a shock to us. I am saddened that SJ was not given any information about this earlier. We had agreed to introduced the high-speed investment at full speed. As things stand now, our ordinary trains won't even be able to accommodate the volumes travelling on this line today,” Fritzson told DN.

Jernbaneverket told the newspaper it had not been told in advance of SJ's decision, which a press spokesman said came as a surprise.

“We had a meeting with SJ on Thursday last week and did not hear anything about them interrupting their high-speed venture. We expect an answer at some point during this week,” said Arbid Bårdstu.

He added that Norway had recently decided to allocate extra funds to upgrading the Norwegian rail network, which had enabled Jernbaneverket to undertake the new maintenance work.

“The overhead cables are old and must be upgraded and unfortunately that takes some time,” Bårdstu told DN.