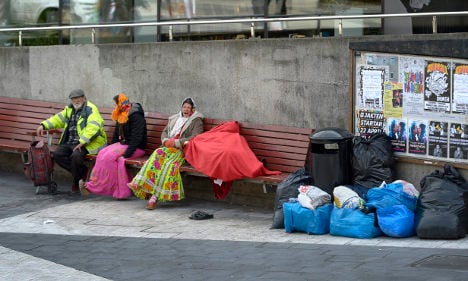 Sweden and Romania are expected to sign the new agreement on Friday. The Nordic country has not yet earmarked any funds to the project, which will mainly focus on the education of Roma children, women's rights and welfare services.

The deal follows a surge in begging in Sweden, with a study in April suggesting that around 4,000 vulnerable EU migrants – many from Romania – are now living in the Nordic nation.

Most of the beggars are members of the Roma community – one of the EU's largest minority groups. Many live in tents or caravans and make a living by asking Swedes for money outside shops and underground stations.

Sweden and Romania have said they will cooperate and work against fighting poverty within the Roma community. Friday's deal follows key talks between ministers from both countries in the Swedish capital earlier this year. The Swedish minister for children, the elderly and gender equality, Åsa Regnér, told the Dagens Nyheter newspaper on Thursday that statistics show that the Roma minority in Romania performs worse than the majority group in areas such as unemployment, income and education.

“So it is not difficult to understand what drives them to come here [to Sweden]. But the situation is untenable. It is not good that they live in difficult circumstances here. We therefore want to contribute to giving them a better life in Romania,” she said.

But Cordrin Scutaru, secretary of state at Romania's social affairs ministry, added he did not view poverty as a structural problem in the country.

“It's an individual choice. The beggars respect neither Swedish nor Romanian law. They should look for work instead. Begging should not be a choice to them,” he told Swedish tabloid Expressen.

The focus of the new agreement is to enable Sweden and Romania to exchange knowledge and views on social issues. Sweden will also share information in order to help Romania apply for EU structural funds.

But Martin Valfridsson, Sweden's national coordinator for the work with vulnerale people in Europe, told The Local in April that the deal could also help solve the plight of Roma beggars in Scandinavia.

“In the long run this could be one of the effects. If you've got a good life in your own country you are less likely to travel to another. It's one piece of the puzzle,” he said.