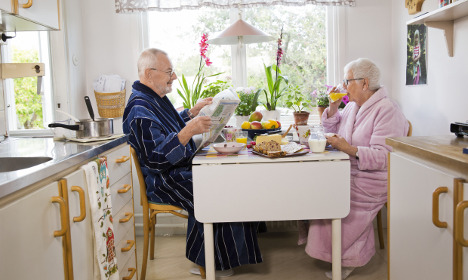 Two Swedish pensioners. Photo: Susanne Walström/Image Bank Sweden
Professor Erik Ingelsson and Dr Andrea Ganna from Uppsala University developed a test for men and women living in the UK aged between 40 and 70, which they believe can determine which Brits will make it to 2020 and which won't.
“We show that, using a few simple questions, one can predict the risk of dying within five years with greater reliability than in any other way we know today,” said Ingelsson in a press release.
The research, which was published in prestigious science journal The Lancet, before being picked up by numerous global media, demonstrates that self-reported health information can be a stronger predictor of death than medical examinations looking at variables such as blood pressure or pulse rates.
The questions — known as the Ubble test — probe users on factors such as walking speed, their finances and marital situation and their previous illnesses.
In order to create the test, the researchers analyzed data from the UK Biobank, one of the world's largest health databases, which includes information on nearly half a million middle aged British adults collected between 2006 and 2010. This means that the test can currently only offer accurate predictions for people living in the UK.
But the researchers are convinced that their research could have a wide-ranging impact.
“We think our study and the associated risk calculator will become an important tool for a wide range of researchers, but also for doctors, decision-makers and the public,” added Ingelsson in the release.
He later told The Local: “I think it is great that we have got so much attention. We believe it is an important study and we have spent a lot of time and effort in trying to disseminate the results in a way that the general public can understand. I think the huge interest probably shows that we may have succeeded in that.”
News of the 'death test' went global on Thursday after British media first reported the story.
The Telegraph's Science Editor wrote that despite the calculator's obvious benefits, its results were probably “the last thing middle-aged people want to know”.
Meanwhile the Reuters news agency simply ran with the headline “Wondering how long you have” while India news site ANI said: “Now, know if you'll die within five years with Ubble”.
Uppsala University told The Local on Thursday that it was “very happy” that the study had made such an impact.
“We are a broad research university and life science is one of our strong areas. Obviously many people are interested in these research results and are trying out Ubble themselves. And that is of course the greater goal for the university: knowledge for the benefit of humankind,” said Pernilla Björk, Director of Communication.
You can take the test at ubble.co.uk, a website developed by the UK charity Sense About Science.
Here are the questions
What is your age?
What is your gender?
How many children do you have/have given birth to?
Do you smoke tobacco now?
In the past how often have you smoked tobacco?
In general how do you rate your overall health?
Do you have a long standing illness or disability?
How would you describe your usual walking pace, slow, steady or brisk?
Have you ever seen a GP [doctor] for nerves, anxiety, tension or depression?
Has a doctor ever told you that you have cancer?
In the last two years have you experienced: serious illness, injury or assault to yourself; serious illness, injury or assault to a close relative; death of a close relative; death of a spouse or partner, marital separation or divorce; financial difficulties?
Do you receive any of the following: Attendance allowance; Disability allowance; [UK social security benefits], Blue Badge? [disabled parking sticker].