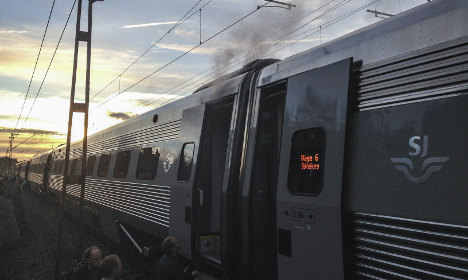 An SJ train. Photo: TT
Sweden's state-owned train operator, SJ, revealed on Tuesday that the quicker trains, aimed at business travellers in Scandinavia, were being put on hold due to maintenance work on overhead cables in Norway, scheduled to take two-and-a-half years.
But on Friday it announced that it had held fresh talks with Norwegian Jernbaneverket, which manages Norway's railway network, adding that its Nordic counterpart had agreed to postpone its repairs instead.
The new high speed link between Oslo and Stockholm is set to start running on August 9th, with SJ's flagship X2000 train set to run on the line offering three departures a day between the two cities and cutting journey times from six to four-and-a-half hours.
The Swedish train company is targeting international professionals who are increasingly choosing to fly between the Scandinavian destinations, with its project set to cost tens of millions of kronor.
SJ's CEO Christer Fritzon issued a press release on Friday explaining that the return to the firm's original plans had followed “crucial” and “positive” dialogue between SJ and the Norwegian authorities.
He later told The Local he was “anxious to start the new fast train service”, adding that “it was a splendid decision by the Norwegian authorities”.
Describing the new trains as “the most comfortable and fast ever built in Sweden” he said he hoped that the service would make a huge difference to business travellers in the region.
“It [will] allow good possibilities to work, relax and have a pleasant meal  – not to mention the access to our first class lounge in Stockholm.”
The twice daily current slower services between Oslo and Stockholm are set to continue for the foreseeble future,
Earlier in the week it emerged that Norwegian Jernbaneverket had recently been allocated extra funds by the Norwegian state, with this cash later earmarked for the cabling work on the route.
“The overhead cables are old and must be upgraded and unfortunately that takes some time,” a press spokesperson for the company, Arbid Bårdstu told Swedish daily Dagens Nyheter.
SJ suggested on Friday that its Norwegian counterparts would now undertake the work in 2017.