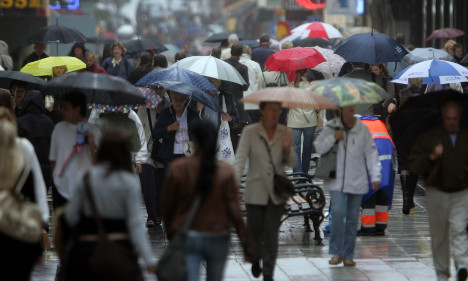 A rainy day in Stockholm. Photo: Fredrik Sandberg/TT
Swedish weather forecasters had suggested temperatures could climb to 25C in parts of the west and south of the nation, with media hyping up a 'Spanish-style' hot spell thanks to a warm front moving in from the Mediterranean.
But meteorologists were forced to eat their words on Friday, as it became clear that it was set not just to rain on Saturday, but that thunderstorms were also heading towards Sweden.
“Sorry to be so wrong. It did look like it was going to be so fine earlier this week,” Maria Jonsson, duty meteorologist at the weather service Foreca told the Gothenburg Post.
She said she expected Sweden's second city to experience “severe thunderstorms after noon and continuous rain from morning until late afternoon,” adding that she expected between 10 and 15mm of rainfall in total and temperatures of between 15 and 17C on the west coast.
Heavy rain is also forecast in Stockholm on Saturday, alongside similar temperatures and few parts of the country expected to avoid some rain or drizzle.
Northern Sweden is expected to remain wet on Sunday, with brighter weather predicted further south.
READ ALSO: Sweden's May weather 'worst since 1962'
The wet and gloomy weather comes as the country prepares to celebrate its National Day on Saturday and follows two other wash-out public holidays in recent weeks. Walpurgis night at the end of April was damp in many parts of the country, while Ascension Day on May 14th failed to bring sunshine to most of the country.
Earlier this week, meteorologists said that Sweden's May weather was the worst experienced at this time of year since 1962.
Per Stenborg, a forecaster for Swedish television network SVT said on Monday that the country had been “extremely rainy and sun-starved” in May, and added that “a few hot days” had skewed average temperatures during what felt like an extremely cold few weeks for many people.
The hottest day of the year so far has been April 20th, when Arvika in Värmland in western Sweden reached an unusually high 22C.
Meanwhile other parts of Europe including France, Germany and Spain have enjoyed early summer heatwaves this week.
Check the weather forecast in your part of Sweden