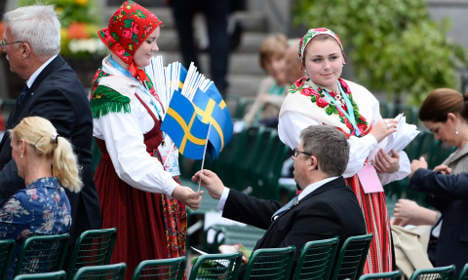 Americans celebrate the Fourth of July with fireworks and huge parties. Norwegians happily dance around in the street when Syttende Mai comes round. But to Swedes, this Monday’s National Day is likely to quietly pass largely unnoticed.

Expats are often stunned at why Swedes are so blasé about their National Day, so we’ve pulled together five key reasons behind the apparent lack of interest.

1. The day is artificially created

The emergence of the Swedish National Day was very much a top-down decision. While Norwegians celebrate May 17th in memory of their first constitution in 1814 and how they later cast off the oppressive yoke of their Swedish masters (a Swede might put this somewhat differently), the Swedes mark June 6th because the government told them to.

The official day is vaguely linked to earlier celebrations called ‘The Day of the Swedish Flag’ (‘Svenska flaggans dag‘) which began in the early 1900s after Artur Hazelius, founder of Stockholm’s biggest outdoor museum Skansen, decided he could capitalize on the wave of national romanticism that was sweeping in across the country at the time. He threw a patriotic spring party in honour of his native country and its flag.

However, the day was only made the official National Day of Sweden in 1983 when Swedish politicians scratched their heads and thought they could not possibly allow themselves to be outdone by the Norwegians and their huge celebrations.

2. Nobody knows what to celebrate

If you ask a Swede, they are likely to mumble something vague about Gustav Vasa, who is one of the few past kings that most Swedes are actually able to name.

The day does indeed coincide with the anniversary of Gustav Vasa’s election as Sweden’s king in 1523, marking the end of the union with Denmark and the start of a new period of closer unity within Sweden. June 6th was also the day in 1809 on which Sweden adopted a new constitution, something it did again on the same date in 1974.

But none of these dates are the reason behind the National Day. They are all just happy coincidences. This may explain why many Swedes struggle to muster any excitement for the day.

Some more trivia: back in 2013, a survey by the communications bureau GFK suggested that only 27 percent of Swedes celebrate the National Day. And a third of the 1,015 respondents were not able to say why the day is marked on June 6th.

3. It has “replaced” Whit Monday

So, we’ve already told you that National Day was first officially recognized by the government in 1983. However, the powers-that-be slowly caught up with the fact that their vain attempt of creating a day of unity had not gone down so well with the Swedes. After years of debate they eventually made it into a public holiday in 2005, hoping a day off could tempt the Swedes into feeling some patriotic pride.

Boy, did that one backfire.

Instead of simply creating a new public holiday, the government swapped it for one of the old ones. This is a sore point for many Swedes, who preferred the old holiday Whit Monday – the day after Pentecost. This always gave them a nice long weekend. Of course, this year both dates coincide, twice every seven years it gets swallowed up by the weekend.

4. The Swedes already have a better holiday

“But I’m an expat in love with my adopted country! How do I celebrate?” we hear you ask. Erm. We don’t know. The truth is, there are no real traditions. Until it became a public holiday, the only visible signs of National Day were the flags flying in people’s gardens and from buses and trams.

These days, the royals mark the day by taking a carriage procession from the Royal Palace in Stockholm to Skansen. The Swedish flag is raised and bouquets are given to the Queen and princesses. Try not to fall off your chair in excitement.

Most Swedes save their display of patriotic love for Midsummer, later this month. That’s the day when they do everything you imagine that they would do on their National Day, if they celebrated it.

Midsummer’s Eve is when people meet up with friends and family, eat a few plates of pickled herring, drink some snaps, boil a few potatoes, serve up Swedish strawberries and decorate the table with Swedish flags. Then they get drunk and wake up the next day wondering if that dance around the May Pole was really such a good idea.

5. Swedes are not the flag-waving kind

Swedish patriotism is a peculiar thing. While people don’t mind flying their flag at ice hockey tournaments or the Eurovision Song Contest, they feel a bit awkward exclusively dedicating a whole day to celebrating their nation. Partly because Swedes usually don’t fancy the spotlight, partly because many associate patriotism with reactionary far-right politics. In fact, police are often out on the day keeping groups of left-wing and right-wing extremists apart.

Interestingly, June 6th is becoming increasingly popular among immigrants and expats. The aspect of National Day that often attracts the most media coverage is the growing tradition for town halls up and down the country to hold citizenship ceremonies for new Swedish passport holders.