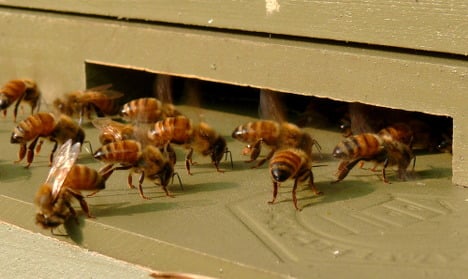 According to Kristin Käck, a resident of the building in Helmfeltsgatan, the bees started to congregate on Friday morning. “They were bouncing off our windows and formed large mounds on the pavement,” says Käck who filmed a video of the bees.

The building was swiftly cordoned off so passersby wouldn’t step on the mounds of bees. “It continued for most of the day,” Käck told the Sydsvenskan newspaper.

Eventually, the Malmö Beekeepers' Association (MBA) was called to organize the collection of the bees.

According to Pers Andersson of the MBA, the bees came from an overcrowded hive.

“The bees may have come from a hive on the Opera roof. Or from any of the colonies in Pildammsparken. They sat in the trees and sent out scout bees to find a new home. The scouts flew back to tell them about the new home.

“But when they got there, the queen bee appeared to have fallen to the ground, which is why they all congregated on the pavement.”

On Friday night Andersson managed to gather between 10,000 and 15,000 bees in packed bee boxes.

But the problems for the residents of the apartment block are not over.

“There is a new bunch of bees swarming here today. They seem to have built themselves into our building,” said Mirsad Voloder, of the residents’ association, on Saturday afternoon.

This time the Malmo Beekeepers' Association seems to be powerless. A swarm of bees that establishes itself in the vents, walls, chimneys and very fabric of a building is difficult to move without calling in less diplomatic forces. It seems like it might be time to call pest control.