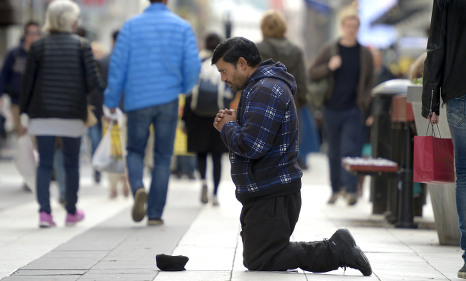 A man, unrelated to the story, begging in Stockholm. Credit: TT NYHETSBYRÅN

The man suffered injuries to the face and was taken to the Karolinska Hospital in Solna, where he was taken care of by personnel wearing protective suits.

His female companion escaped without injury as the acid hit the back of her jacket.

At least one witness saw the incident – and gave chase after the offender. “The offender ran from the scene and a witness chased him but could not catch up,” said a police spokesman, Tommy Dimitrakis.

“It is a terrible act, of course, and now we are investigating,” Dimitrakis continued.

Police confirmed that the attack was unprovoked and that they had not yet determined what kind of acid was used in the attack on the EU migrants.

The attack is the latest in a spate of attacks on beggars. Just two weeks ago a beggar outside a Stockholm supermarket was targeted with a firecracker.