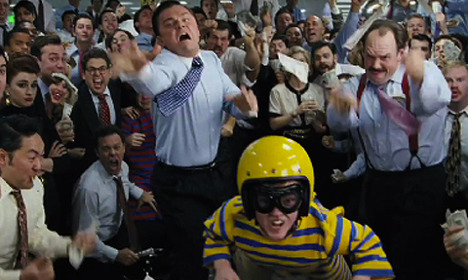 Screengrab from the dwarf-tossing scene in the film Wolf of Wall Street.

Created just last week, the Swedish site dvarg.se rents out people with dwarfism to work and entertain at corporate and private events.

“We cater for everything from nightclubs to bachelor parties. No requests are ever the same,” the company’s founder Johannes Eriksson, 28, told The Local.

“Last weekend we had a request for some of our employees to kidnap a guy at a bachelor party.”

Services offered by the company include “dwarf-boxing” and bartending, both priced at 4,000 kronor and bodyguards priced at 5,000 kronor per dwarf. Clients can also come up with their “own crazy idea” for 1,000 kronor per hour.

The company also previously advertised “dwarf-tossing” at 8,000 kronor, but this service has now been removed from the website.

Eriksson said he was inspired to create the website after meeting Arash Ayatinejad, himself a dwarf, who used to work for a similar company in Denmark, at a bachelorette party.

“He said he was terrible at internet marketing and I offered to help him. After doing some key word research I found that there were lots of people searching for it online and I couldn’t find a single agency in Sweden.”

Since the site launched its owners have received several requests. Employees of the firm have worked with high-profile clients such as Spotify and HBO Nordic.

The company has ten employees and has around three to five events booked per week.

But the firm has faced strong criticism in the Nordic nation, notably from Maria Persdotter, chariman for the Swedish National Association for Disabled Children and Young People.

“It makes me very angry but also very sad,” Persdotter told The Local.

“In Sweden the goal is that everybody is entitled to a good education, supposed to have a normal job, have a family, raise children and have a home. This is like a giant step back in history to when people would pay to watch strange-looking people.”

The fact that the co-founder Ayatinejad has dwarfism himself does not discount from the bad example it sets to young people, according to Persdotter.

“I think that if someone is diagnosed with dwarfism and is an adult then they have the right to do whatever they want. But it doesn’t set a good example to children and teenagers growing up today.

“The idea that this is the way you’re supposed to earn money as a dwarf is very disturbing.”

But Eriksson insists that there is nothing controversial about the services his company offers.

“I don’t think I need to respond in any other way than that I am a liberal man and I think that everyone should be able to do what they want with their own body.”