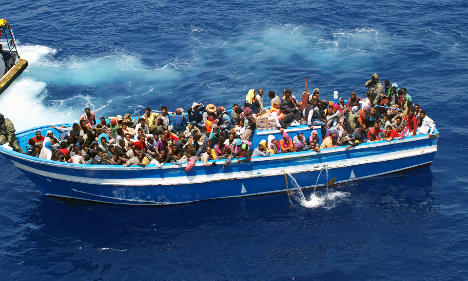 The migrants being taken to Posedion. Photo: TT

Posedion has been patrolling the waters between Italy and Libya since June 1st, as part of EU-wide efforts to help migrants making the dangerous journey between the two nations.

The ship, which is more than 90 metres long, picked up 262 people travelling in wooden boats on Sunday night, after the migrants sent out distress signals.

It is the first time a Swedish ship has been involved in the current efforts to help refugees in the Mediterranean.

“We rescued those on board, everything went really well and the weather is good with very few waves. Right now we're heading towards Sicily,” Joakim Håkansson, Poseidon's commander, told the TT newswire via satellite phone on Sunday.

He said the rescue operation had taken place eleven kilometres north of Tripoli and that the migrants had reported being at sea for around twelve hours.

Once safe and dry on Posedion, the migrants were given food and water as well as access to toilets and washing facilities and were sat underneath large tarpaulin sails to protect them from the sun.

“They seem to feel good. Some are tired and have fallen asleep and others are standing and talking,” Håkansson reported.

He said that the migrants were understood to have travelled to the Libyan capital from Eritrea, Somalia and Syria.

According to the Reuters news agency, a total of 2400 migrants were rescued in the Mediterranean on Sunday, with Italian, German, British and Irish vessels joining Triton, the international search-and-rescue operation being run by Frontex, the European Union’s joint border control agency.

The operation takes place as the Mediterranean crisis remains hotly debated across Europe.

The European Commission has asked all EU member states to take in a proportion of the refugees seeking asylum in the 28-member bloc.

But several countries have voiced concerns about the strategy including Hungary, Slovakia, Spain and Estonia. The UK has chosen to avoid the plans due to an existing EU agreement which allows it to ‘opt out’ of some issues.

Sweden already takes in more asylum seekers per capita than any other member state. Last month it was told to help relocate 821 migrants who have arrived in Italy and 548 who have travelled to Greece as part of the European Commission's controversial plans.