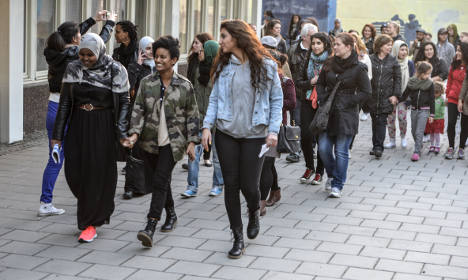 Husby in Stockholm has a high immigrant population. Photo: TT
While the ECRI concludes that Swedish authorities “have taken some small steps towards reducing social exclusion and its effects on migrants,” its report argues that “there is still no evidence of a coherent, overall national action plan to address the issue”.
The ECRI is the human rights body of the Council of Europe, an international organization that promotes co-operation between 47 European countries. Unlike the European Union, it cannot make binding laws, but regularly makes recommendations following research by panels of independent experts.
In 2012, it issued a report suggesting three key ways Sweden could improve integration over the next two years: limiting residential segretation, doing more to resolve family reunification problems due to missing paperwork and lifting a ban on free medical care for people living in Sweden without residency permits.
But in a news release on Tuesday, the ECRI said that Sweden had only fully implemented the last of those recommendations.
“Sweden is a leader when it comes to taking responsibility for recieving asylum seekers, but the flip side is that segregation remains a major consequence,” Christian Åhlund, Chair of the ECRI told The Local.
“Most of the time it is rare for all our interim recommendations to be followed up and get a green light, so to have one fully fulfilled and two partly fulfulled is a good result,” he said.
“But on the other hand it is clear that segregation is getting even more serious than when we wrote our report in 2012, because there has been such an influx of immigrants to Sweden since then,” he added.
Åhlund said that the ECRI was particularly disappointed that local branches of Sweden's discrimination ombudsman (watchdog) had failed to open in areas such as Rinkeby in Stockholm, where there has been unrest in recent years.
“The previous government said this was their intention, but as far as I am aware, nothing has happened,” he added.
READ ALSO: Rising fears about integration in Sweden
Sweden has a global reputation for peace and tolerance and currently takes in more asylum seekers per capita than any other European country, with 81,000 arriving in 2014.
But recent polls have suggested that immigration and integration are the most important issues for potential voters.
“Many European countries have problems with integration, but the ECRI sees this as the most important problem in Sweden right now,” said Åhlund.
The Local has approached Ylva Julia Margareta Johansson – Sweden's Employment Minister – as well as the country's Minister for Justice and Migration Morgan Johansson for comment.
Morgan Johansson has previously said that he wants to maintain the Nordic nation's tolerance, although he strongly supports a new EU plan to distribute refugees seeking asylum more evenly around Europe.
“Europe has a common responsibility to save lives on the Mediterranean and contribute to political solutions and peace in Syria, Iraq and other conflict areas so that people are not forced to become refugees,” he told The Local.
“But all EU member also have the obligation to shelter people in need of protection.”