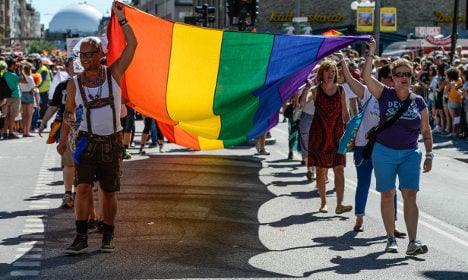 People holding a rainbow flag at the Stockholm Pride festival in 2013. Photo: TT

Morgan Emgardsson, who is a councillor for the centre-right Christian Democrat party in the city of Västerås, rejected a motion by the City Council to fly a rainbow flag to mark the city’s gay pride festival, saying that if the flag was approved then the Nazi flag should also be allowed.

Emgardsson then attempted to clarify his position, saying: “I just wanted to say that if we allow the disclosure of an organization’s flag, then we must allow others. The municipality should just have the Swedish flag and its own flag.”

Flying the rainbow flag, which has been a symbol of lesbian, gay, bisexual and transgender (LGBT) pride and LGBT social movements since the 1970s, was nevertheless overwhelmingly approved by the City Council.

“There’s a big difference between a swastika and a rainbow flag. Rainbow flags don’t belong to any organization. It is a symbol for the right of all people to love whoever they want,” he was quotes as saying by Swedish broadcaster SVT.

A spokesperson for the Christian Democrats told The Local the comparison was “unacceptable”.

“This is not what we stand for as a party,” she said. The spokeswoman added that the councillor had since apologized for the comments, saying that he did not mean to make the comparison in that way.

The Local has also contacted the gay rights organization RFSL for comment.

Emgarsson is expected to release a statement later today.

The Christian Democrats are one of the smallest political parties in Sweden, but had a strong presence in the previous national goverment as part of former Prime Minister Fredrik Reinfeldt’s Alliance centre-right coalition.