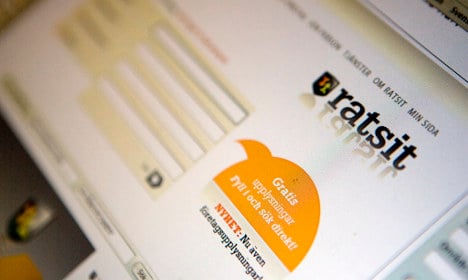 Ratsit, which caused an outcry when it was first launched in 2006, quickly became one of the go-to destinations for Swedes seeking to look up other people's financial details – from nosy neighbours to journalists, would-be landlords and private investigators.

After briefly giving its users the chance to anonymously check what others were earning, the site was stopped from continuing the online initiative after Sweden's Chancellor of Justice concluded that the controversial company should have obtained a licence before it began releasing income details online.

It later launched a service allowing paying customers to request the personal data of up to 39,000 people at a time. On Tuesday announced it was set to expand on this, by publishing a regional directories four times a year.

The move was revealed in Swedish newspaper Dagens Media (DM) on Tuesday, which reported that 290 quarterly editions – one for each Swedish municipality – would be put together and made available for 199 kronor each.

Sweden’s liberal freedom of information laws mean anyone can call the tax authority and be given information about other Swedish residents’ incomes for the previous year. This information is collated and published by a private company every year.

Swedes with debt problems are monitored by the Swedish Enforcement Agency, which provides details of those with black marks next to their names to anyone who asks. However, these details are currently not collated and published in a catalogue.

Dagens Media reports that all Swedes over the age of 18 will be included in Ratsit's new directories, which would include both income data and credit history information.

“It's a classic tax calendar, though we have added negative information in the form of credit history,” Anders Johansson, CEO of Ratsit told DM.

In simple terms, this means that everyone from employers to landlords, partners and future dates will be able to check up on whether someone has a good or bad credit rating.

The Local has asked Ratsit to comment on the move, which is expected to generate controversy when it is rolled out later this week.