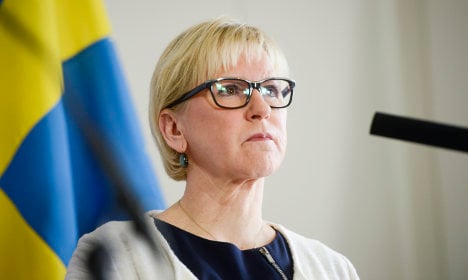 Sweden's Foreign Minister Margot Wallström last month. Photo: TT
Speaking to Swedish Radio, Wallstöm strongly criticized the decision to sentence the writer to 1,000 lashes for insulting Islam.
“My opinion is that it's a medieval sentence. It's a medieval method that does not have its place in a society that allows a free media and allows people to express their point of view,” Wallström said.
The minister was reiterating comments that led to a diplomatic row between Sweden and Saudi Arabia earlier this year – one of the biggest public crises the Nordic nation has experienced in recent times.
She said in a speech to parliament that Saudi Arabia was a “dictatorship” that violated women's rights and whipped bloggers.
In March, Saudi Arabia recalled its ambassador to Stockholm, accusing Sweden of “flagrant interference” in its affairs.
Around the same time, Sweden unilaterally cancelled a longstanding military cooperation deal between the two countries, prompting Saudi Arabia to prevent Wallström from making a speech on human rights to the Arab League.
Her planned remarks, published by the Swedish foreign ministry, did not mention Saudi Arabia but stressed women's and human rights.
The politician found herself accused of letting her feminist foreign policy ideals clash with the demands of realpolitik, with several powerful businesspeople claiming she was jeopardizing Sweden's trade relations with the Arab world.
But the matter was resolved several weeks later via diplomatic channels.
Wallström has maintained that she had the support of the Swedish people in expressing her position.
“It's important that you stand up for what you believe in, even when it costs you,” she said in an interview with The Local last month.
“I think there's a double standard among many who criticized me. They say that 'yes, sure, we'll stand up for democracy and human rights, but it must not cost us anything.' And yes, one could actually wish for a clearer stance from those who at least in words say they want to support my position.”
Saudi laws are based on Islamic Sharia law, a moral and religious code.