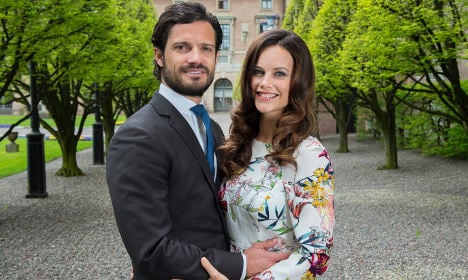 Prince Carl Philip and Sofia Hellqvist will be tying the knot this Saturday. Photo: TT

1. The bride and groom walk down the aisle together

Unlike in the US or UK, in Sweden there is no tradition of the father of the bride giving his daughter away to her husband and the bride and groom will typically walk down the aisle together.

In fact, Gink says she often has a hard time trying to convince priests and ministers to let the bride’s father give her away.

“They just don’t like the idea of a woman being owned by a man and given away to another man,” she explains.

A high profile example of this was the wedding between Sweden’s Crown Princess Victoria and Prince Daniel, when Victoria requested her father to walk her down the aisle.

“In the end she walked almost to the front of the altar with her father and then Prince Daniel took over and they walked the last few steps together,” says Gink. 2. Kidnapping the bride and groom-to-be

While in the UK or America men and women usually know when their stag do (or bachelor party) or hen party (bachelorette bash) is — or even plan part of it themselves — in Sweden they’ll often be caught completely unawares.

Typically in Sweden, this involves the groom or bride being kidnapped by their friends.

“The bridesmaids or groomsmen will often plan a whole day or weekend where they surprise the groom and kidnap him. Normally the other partner knows that this will happen and will lie to make sure that they are in the right place at the right time.

“Often there’s the awkward situation of the bachelor and bachelorette party falling on the same day so they both have to fool each other.”

Don’t be alarmed if the bride and groom kiss other people on their wedding day.

“Then there’s almost always a male friend who also gets up to kiss the groom,” she adds with a laugh. Swedish weddings tend to drag on a bit due to the amount of speeches.

The first speech is typically a short toast to the bride during the champagne mingle before the dinner, known as the Brudskål.

Then during the dinner there will often be from eight to 12 speeches, as well as screenings of videos from the bachelor and bachelorette parties, games and songs.

A friend of the couple is usually designated master of ceremonies to coordinate all of this.

“A wedding dinner that lasts three or three and a half hours is short in Sweden. Sometimes if a wedding is badly planned then this can even go on for even five or six hours,” says Gink. 5. The man gets an engagement ring too

When a couple becomes engaged it’s typical for both the man and the woman to exchange rings. Then only the bride will get the second ring at the marriage ceremony.

“According to the old tradition the engagement rings are plain wedding bands and then the wedding ring is the one with the stone,” says Gink

“But now it’s getting more and more common for the bride to get a diamond solitaire ring at engagement, so the traditions have changed a bit.”

6. There’s sometimes no maid of honour or best man

In the UK – and especially in the US – it’s typical to have a maid of honour or best man in charge of a large pack of bridesmaids and groomsmen and a bunch of logistical duties.

In Sweden there are often just one or two bridesmaids (brudtärna) and groomsmen (marskalkar).

“But since I work with so many international clients including Swedes living abroad or where one of the couple is a Swede, my clients often blend the two traditions,” says Gink. 7. Photos are sometimes taken before the ceremony

In some cultures it’s forbidden for the groom to see each other before the marriage ceremony but in ever-efficient Sweden, couples sometimes get their wedding snaps taken a few hours before for logistical purposes.

“Since the tradition states that the bride and groom actually walk down the aisle together then it’s not such a big deal to meet before,” says Gink.

“But many couples prefer it to be a surprise.”

Nowhere near married yet? Check out our guide to bagging your very own Swede