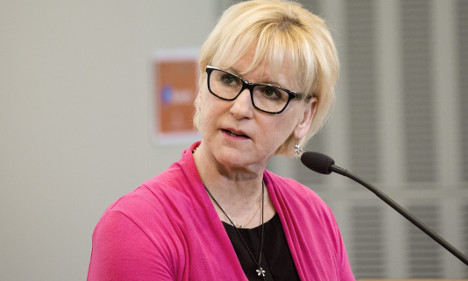 Margot Wallström speaking at a seminar in Stockholm on Monday. Photo: TT

Wallström first announced that Sweden would prioritise women's rights in its foreign policy after the Social Democratic-led government took power in October 2014.

“It will take so much longer, it'll be so much harder … to get sustainable peace” if world leaders ignore women's views, Wallström told international media at a seminar on foreign policy in Stockholm on Monday.

Wallström said she was aware that the “feminist foreign policy” tag had raised some eyebrows internationally, but “it defines us in political security issues. It applies to everything we do.

“In other countries (a feminist foreign policy) can have a negative connotation,” she admitted.

In a move widely viewed in Sweden as illustrative of her focus on women's rights, Wallström in February said in a speech to parliament that Saudi Arabia was a “dictatorship” that violated women's rights and whipped bloggers.

The statement led to a diplomatic spat that saw the ambassadors from Saudi Arabia and the UAE temporarily recalled from Stockholm and a Swedish-Saudi arms agreement cancelled.

The politician found herself accused of letting her feminist foreign policy ideals clash with the demands of realpolitik, with several powerful businesspeople claiming she was jeopardizing Sweden's trade relations with the Arab world.

“It's important that you stand up for what you believe in, even when it costs you,” she said in a separate interview with The Local last month.

“I think there's a double standard among many who criticized me. They say that 'yes, sure, we'll stand up for democracy and human rights, but it must not cost us anything.' And yes, one could actually wish for a clearer stance from those who at least in words say they want to support my position.”

Margot Wallström has also taken a strong stance on several other global issues in recent weeks.

On the Mediterranean migrant crisis, she has argued that other countries need to be more sensitive to the plight of refugees.

“I think it's about slowly but surely understanding what has changed in our surroundings, that we have so many people fleeing, that the pressure is so huge today and that never before have we been so directly affected by the crises deepening in Syria, Iraq, Yemen or elsewhere,” she told The Local recently.

The politician has also said it would be “unthinkable” if the UK left the EU and has criticized some UK media for painting a negative image of Brussels.