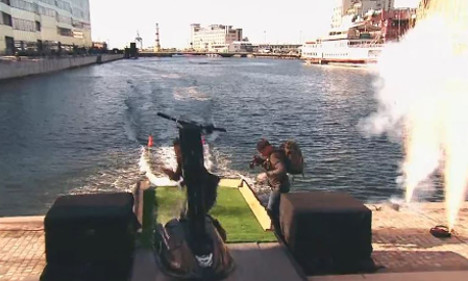 A screenshot from the video of the crash.
Speeding along a canal in Sweden's third-largest city, Petter Stordalen looked slick as he cruised in a speed boat before hopping on to his jet ski, with the whole charade beamed to crowds of onlookers watching on giant TV screens next to his new hotel.
But he hit the shore too quickly, crashing on to the cobbled payment in front of 10,000 locals, celebrities and business leaders. He definitely made an entrance, but not quite the one he was planning.

Unhurt, the hotelier then jogged towards his latest venue, Clarion Hotel and Congress Live, before donning a brightly coloured embroidered jacket and addressing the crowds from a specially erected stage.
While the stunt took place over the weekend, the story went global on Wednesday as hotel website eHotelier attempted to tell the world that the man once named “the flashiest Scandinavian on the planet” by Forbes Magazine had still managed to look cool during the incident.
“And that is how you open a hotel,” read the article, which described the business magnate as a “Norwegian daredevil” and praised him for making fun of his mishap on Twitter.

Is there a competition for 'Best Assplant from Jetski' I can nominate myself to? Alt for #clarionmalmoelive https://t.co/RqArYPBAxe

While the piece – which includes a heavily edited video of Stordalen's arrival – was being shared internationally by Wednesday morning, Malmö residents have told The Local it does not reveal the full story of the building's opening.
Costing $400 million, the development has proved controversial, with the city contributing to its massive budget and the large building changing the look and feel of Malmö's shoreline.
Immediately before Stordalen leapt onto the stage, protesters had ambushed a speech by Malmö mayor Katrin Stjernfeldt Jammeh with banners saying “Social Democrats choose fancy buildings instead of welfare”.
“I think that changed the mood perhaps,” Karin, 34, told The Local. “There was this huge contrast between him screaming 'I love Malmö', and Malmö not responding all that much. It felt sort of like an anticlimax.”
In the end, she said, Stordalen resorted to praising the local football team, as it was the only way he could get a rise out of the crowd.
“He talked for a really long time about how Malmö was the city of his dreams, but the only thing that got people cheering was when he mentioned Malmö FF.” Petter Storalden in Malmö at the weekend. Photo: TT
Stordalen already has a controversial and somewhat chameleon-like reputation.
Married to doctor and green campaigner Gunhild Stordalen, he has been open about having plenty of women in his past, yet bans pornography on pay TV in his hotels.
The son of a grocer, he owns in excess of 170 hotels through his company Nordic Choice Hotels and employs more than 9200 people.
He claims to be anti-capitalist and has taken part in environmental protests.
The billionaire is also a huge fan of Sweden. He told Swedish Expressen newspaper on Monday that he feels “like a Swede in a Norwegian's body”.
Stordalen's presence remains much coveted in business and fashion circles.
Also the owner of a clothing chain, he was awarded Norway's Best Dressed Man prize in 2012.
Norwegian director Preben Winther Hansen who shot the video of the Malmö opening told eHotelier this week: “We knew he was a sporty dude, but we have never seen anyone drive a jet-ski like that. He just went for it. He must be the definition of a thrillionaire”.