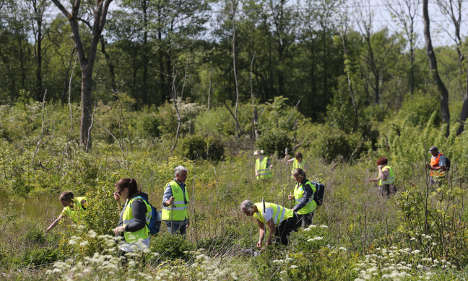 More than 900 volunteers have joined police in searching for the missing teenager over the past few days.

On Thursday afternoon a spokesperson for the charity, Kenneth Söderlund told the TT news agency that there had been a significant new discovery in the investigation.

“I cannot say what it is, but it it has been passed on to the police who believe it to be of considerable interest,” he added.

Unconfirmed reports in the Swedish media on Thursday suggested that volunteers may have found a new clue in a church.

Lisa Holm, who was named by police on Tuesday, was last seen at a café in Blomberg near Lidköping at around 6.30pm after working a shift there. Hundreds of people joined the search on Wednesday. Photo: TT

Officers said that Wednesday’s search had led to the discovery of several more “personal items” believed to belong to the girl. Earlier in the week police found parts of a phone and a mobile case around one kilometre from the café.

On Thursday officers expanded their search area from a 300 square metre radius to a much larger 10 square kilometres.

More than 7,000 people disappear in Sweden every year, according to Missing People, but the search for Lisa Holm is one of the biggest in recent years and has captured high media attention.

“This is the most high-profile case I have experienced in this role,” Stefan Gustafsson, a press spokesman for Västra Götaland police told Swedish broadcaster SVT on Thursday. Two police horses are involved in the hunt for Lisa. Photo: TT Volunteers have been searching fields and forests. Photo: TT

Officers have established a command centre at Källby sports grounds near the café where Holm was last seen.

A police helicopter and two horses are also involved in the search mission.

Police have said they believe that Holm is “the victim of a crime” but have not suggested they are looking for any specific suspects in connection with the girl's disappearance.

Another 17-year-old was also reported missing on Thursday in Västmanland, north east of Stockholm.

Police said that the teenager was around 160cm tall and has long dark hair pulled into cornrows. She is understood to have autism.