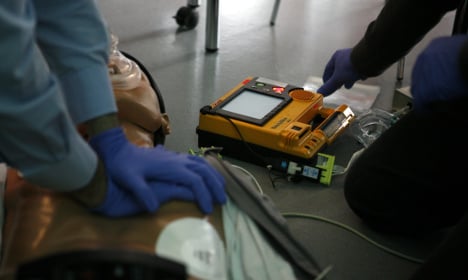 CPR is being administered while a second rescuer prepares for defibrillation. Photo: Rama/Wikicommons

The text-messaging alert system, which uses mobile positioning technology to summon volunteers to the site of a suspected cardiac arrets if within 500 metres, was found to increase the proportion of those receiving cardiopulmonary resuscitation (CPR) by 30 percent.

Published in the New England Journal of Medicine, the study, which was conducted between 2011 and 2012 by Swedish researchers, involved some 10,000 volunteers in Stockholm.

Jacob Hollenberg, a cardiologist at Stockholm hospital Södersjukhuset who helped conduct the study, told The Local that, although similar text alerts had been used in countries such as the US and the Netherlands, the system used in Stockholm is unique.

He said that his team had been partly inspired by the experience of one of his fellow-researchers.

“One of my colleagues who is a senior cardiologist was on a bus one day when it stopped and he heard a thud out in front. He didn’t know what had happened and only afterwards learned that someone had had a cardiac arrest just outside the bus.”

As well as hoping the trial will get more people to sign up to CPR the team also wants to do more to get people to use local defibrillators (an electronic device that applies an electric shock to restore the rhythm of a fibrillating heart).

He added that his team has learned of a lot of previous cases where there have been plenty of public defibrillators within a few hundred metres of a patient experiencing cardiac arrest, but the equipment remained unused.

A separate study conducted by Hollenberg and his researchers looked at 30,000 cases of cardiac arrest in Sweden and found that a patient’s chances of survival doubled if they were given CPR.