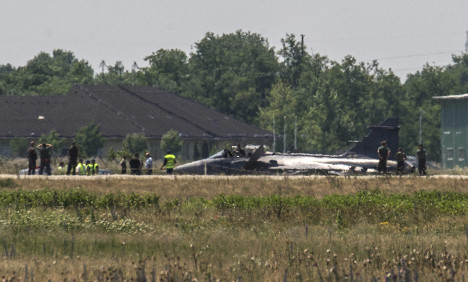 The announcement came after a Hungarian pilot was forced to eject himself from a jet near the town of Kecskemet, in central Hungary, less than a month after a similar incident.

Saab said it would “fully support” the investigation.

“We never speculate on the reasons before a very careful analysis,” a spokesman for the company told AFP.

“We have very rigorous security systems in place. The equipment has been operating for many years around the world and is a very proven and stable platform.”

The accident happened when the plane's wheels failed during a training mission, said Lieutenant General Zoltan Orosz, deputy chairman of the joint chiefs of staff.

The experienced pilot tried to land the Gripen on its belly before ejecting himself when the jet turned sideways and became uncontrollable.

The pilot is in a stable condition in the Kecskemet hospital, Lt Gen Orosz added.

Hungary has a fleet of 14 Jas-39 Gripen fighters.

An investigation is already underway into another incident involving the aircraft.

On May 19th, a two-man Hungarian crew also had to eject before their jet crashed during a military exercise at Caslav army base in eastern Czech Republic.

The Hungarian defence ministry said the two cases were not related.