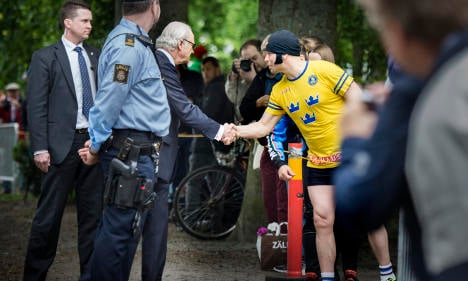 Robert Sandström (in yellow) with King Carl XVI Gustaf. Photo: TT
The Swedish monarch came into contact with groom-to-be Robert Sandström and the rest of his stag group while he made an offical visit to Örebro in central Sweden to celebrate National Day.
After photos were snapped and publised by the TT news agency this week, one of the friends turned to Swedish viral news site Sweddit on Thursday to brag about the encounter.
“It was totally sick!” posted the pal, who chose to remain anonymous.
He claimed that he and fellow stag party organizers had known the king was in the area and had hoped they might get a sighting of the royal.
In the meantime, the group had taken Sandström – who they had forced to wear tiny shorts, a sports shirt and a winter hat – to the park King Carl XVI Gustaf was due to walk through, in order to humilate him in front of the large crowds of locals also hoping to sneak a snap.
“I thought, we must try and get a picture, but I didn't dream that he would stay and greet us,” the friend wrote.
The king, who is known for his sense of humour and has a reputation for partying, spotted Sandström and went over to shake his hand.
“Suddenly I realized that there was a possibility to get my pal and the king in the same picture,” said the post on Sweddit.
Swedish newspaper Aftonbladet later published a gallery of photos taken by members of the stag party, with Queen Silvia looking on and smiling.
READ ALSO: Seven totally Swedish wedding traditions
While in the UK or America men and women usually know when their stag do (or bachelor party) is set to take place — or even plan part of it themselves — in Sweden they’re often caught completely unawares.
Typically, this involves the groom or bride being captured by their friends.
“The bridesmaids or groomsmen will often plan a whole day or weekend where they surprise the groom and kidnap him. Normally the other partner knows that this will happen and will lie to make sure that they are in the right place at the right time,” Swedish wedding planner Mariella Gink told The Local this week.
It is unclear if the king attended his own son's recent stag party, but he will definitely be present as Prince Carl Philip marries his fiancee Sofia Hellqvist on Saturday.