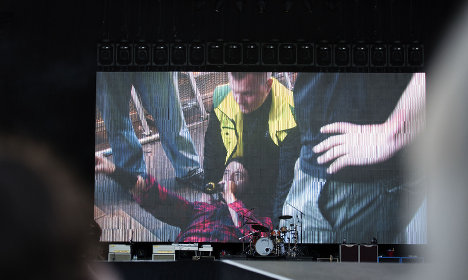 Grohl talks to the audience in Gothenburg soon after his fall. Credit: Erik Abel/ TT

Grohl, the former drummer of Nirvana, stumbled during the second song at Ullevi and injured himself.

But instead of cutting short the show, a recumbent Grohl at first jokingly sang the David Bowie and Queen song “Under Pressure” and then vowed to press on.

“I think I just broke my leg,” Grohl told the crowd.

Then Grohl said: “I'm going to go to the hospital, I'm going to fix my leg, but then I'm coming back and we're going to play for you again. You have my promise right now that the Foo Fighters are going to come back and finish the show.”

Sure enough, Grohl returned after an hour with his leg in a cast, alternately performing with crutches or sitting on a chair, according to footage shared by fans — some of whom, in reference to a Foo Fighters song, used the hashtag #MyHero.

Grohl later tweeted an x-ray of his leg which showed a clean fracture.

Grohl has long earned a reputation among fans and critics as the Mr. Nice Guy of the rock world, despite the dark history behind Nirvana.

Grohl frequently campaigns for progressive causes and has spoken out against drug use.

Foo Fighters will no longer play the Pinkpop Festival in Landgraaf, Netherlands, on Sunday and a show at the AFG Arena in St Gallen, Switzerland, on Monday has also been cancelled.