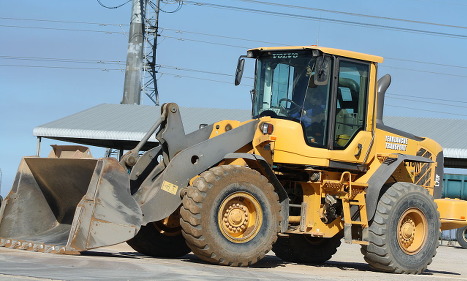 A loader, similar to the one used in the raid. Credit: Bob Adams/Wikimedia Commons

One witness told Sweden's Aftonbladet newspaper, “I saw that they had at least one bag with them and a machine gun-like object.”

“I saw an excavator that tried to crash into the pawn shop. However, they failed the first time, hitting flagstones in front of the entrance”, the witness added.

“The vehicle backed off and ran again at full speed towards the premises and this time the raiders succeeded.”

Once the raid was complete at least three robbers then fled in what has been described by witnesses as a “Jeep-like car”.

“People who were at the scene tried to stop the robbers by throwing objects at the car,” said Aftonbladet's source.

Several cars were also said to be on fire in the vicinity of the site on Saturday night.

Police did not confirm whether this was connected with the raid.

The robbery is in the last two months accomplished in the capital with the aid of heavy machinery.

Last month, three masked raiders drove an excavator into a pawn shop in Kista in the north west of Stockholm, escaping with a variety of gold items.

There was another similar raid on one of the branches of electronics chain Elgiganten in the Bromma area in April. In that raid the gang also used an loader to batter their way into the shop and they also distributed tyre deflation spikes as they fled with several items of electronic equipment.