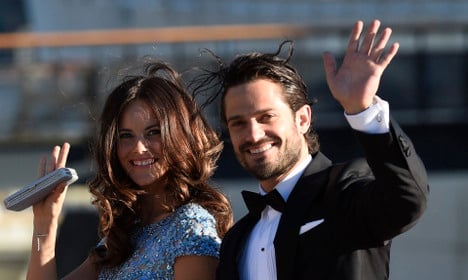 The wedding ceremony will take place in the Royal Chapel in the Royal Palace at 4.30pm. The chapel will be crammed with family members, friends, politicians, diplomats and all manner of other dignitaries.

Prince Carl Philip, third in line of succession to the throne, is the last of King Carl XVI Gustaf and Queen Silvia's three children to marry.

READ ALSO: The ultimate guide to the royal wedding

The weather is should be kind to the onlookers, with forecasters predicting one of the hottest days of the year so far in the Swedish capital.

The newlyweds are expected to emerge from the chapel shortly before 5.30pm, when they will set off on a little jaunt around Stockholm in an open carriage pulled by four horses and accompanied by an entourage of mounted police officers and Life Guards (Livgardet) cavalry.

The procession will move slowly on a 2.7 km route through the centre of Stockholm before returning to the palace half an hour later.

READ ALSO: The couple in pictures

Mathias Dahlgren, the only Scandinavian chef with a prestigious three Michelin star rating, is at the helm of the reception meal in the royal family's posh Vita Havet Assembly Rooms, while Swedish pop royalty Icona Pop and Avicii will be providing the tunes at the wedding evening party in Karl XI's Gallery.

READ ALSO: Avicii talks about performing at the royal wedding

Every detail can be followed on The Local's live blog from 2.30pm.