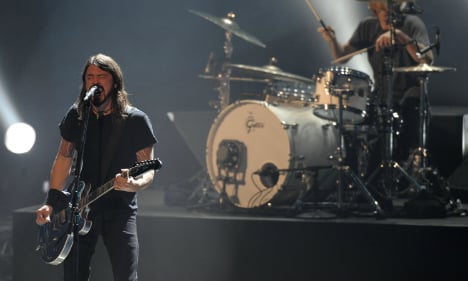 Grohl, the former drummer of Nirvana, was performing in Gothenburg, Sweden, when he tumbled during the second song and badly injured himself on Friday.

But instead of cutting short the show, a recumbent Grohl at first jokingly sang the David Bowie and Queen song “Under Pressure,” before going off for treatment, only to return an hour later with his leg in a cast.

He completed the set alternately performing with crutches or sitting on a chair, according to footage shared by fans, immediately propelling him into music folklore.

“As witnessed by tens of thousands in attendance at Foo Fighters' June 12th show at Ullevi Stadium, Dave Grohl took a nasty spill during the second song of the set,” the band said in a statement posted on Twitter.

“With the help of on-site medical staff who patched him up temporarily, Dave was able to rejoin the band to complete that performance.

“While the full extent of Dave's injuries are still being determined, it was confirmed at a post-show hospital visit that he sustained at least one fracture.

“As a result Foo Fighters have been forced to cancel their June 14th appearance at the Pinkpop Festival as well as their June 16th show at the AFG Arena in St. Gallen, Switzerland.”

Grohl has long earned a reputation among fans and critics as the Mr Nice Guy of the rock world, despite the dark history behind Nirvana.

Grohl frequently campaigns for progressive causes and has spoken out against drug use.