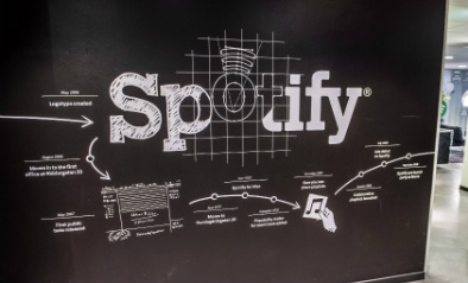 Rami Sabbagh, an energetic 31-year-old financial analyst, fled the Syrian capital Damascus after the regime of President Bashar al-Assad put his name on a wanted list for helping refugees from the city's bombed-out suburbs.

Just over two years later — clad in dark jeans and a leather jacket — he leads the way to a plush meeting room in Spotify's sleek Stockholm headquarters.

The music streaming giant hired him in March after a four-month job placement.

“Four years ago I would never have imagined ending up in Sweden,” he told AFP, recalling how his life was changed by the civil war that erupted in his country in 2011.

“My career was moving forward, I'd been promoted at my bank, I had my own apartment, my own car and my family there. I had a life,” he added.

“But some things force you to move forward, just leave everything behind and try to start a new life.”

When he arrived in the southern Sweden town of Malmö in December 2012, migration authorities placed him in a village 1,200 kilometres (800 miles) farther north where he waited for his residence permit, struggling with boredom and longing to get to the city.

Papers in hand eight months later, he used family contacts to find a room in Stockholm and spent a year studying Swedish, working in odd jobs and applying for positions at English-speaking companies before starting Korta Vagen (Short Cut), a fast-track state-funded programme for university graduates that led to Spotify.

In September 2013, Sweden threw its doors open to Syrians, granting them near automatic residency and boosting overall asylum applications — the highest per capita in the EU according to Eurostat — to record levels.

Since then, more than 40,000 Syrians have arrived — including 30,000 out of last year's 80,000 refugees –amid growing concerns over housing shortages and lengthening queues at employment offices.

Jobless rates among non-Swedish born residents are about double the national average of 7.8 percent and triple for refugees from Africa and the Middle East — fuelling support for the anti-immigration far-right in a country which has long enjoyed a reputation as Europe's most liberal when it comes to welcoming asylum seekers.

The majority of newcomers lack higher education and struggle to find work, hit with the double barrier of the Swedish language and a shortage of low-skilled jobs in a high-tech economy.

All of that has often made it difficult for immigrants to integrate.

But that picture looks set to change, as Syrian refugees come with much higher qualifications.

A quarter of refugees in 2014 had higher education — up almost five percent on the previous year. More than two-thirds of them had skills which matched graduate job vacancies.

“It's easy to get stuck on problems and challenges, but it's also a great possibility for Sweden,” said Nylander, adding that the country was dependent on foreign labour to meet labour shortages in its ageing population.

A 2010 government reform put his agency in charge of integrating new refugees — previously handled by local councils. One major change was that newcomers now start job programmes in parallel with state funded Swedish classes, instead of waiting years to master the language first.

But regardless of skills, housing shortages are a major obstacle for all newcomers.

More than 10,000 people remain stuck in refugee centres months after getting residency; thousands more stay with relatives and friends in cramped conditions.

“We have rising numbers waiting to find a place to live and during that time the integration process halts… Everything indicates that long waiting periods only affect your future employment prospects in a bad way,” said Nylander.

George Zedan, a 45-year-old pharmacist from Hama in central Syria — a province which saw brutal executions by Islamic State forces in late March — stays with friends in Upplands Vasby, a Stockholm suburb, along with his wife and three small children.

Now he works as an apprentice at a local pharmacy on a government-funded scheme while he waits for his qualifications to be recognised.

“I ran my own pharmacy for 10 years but before we left I couldn't work at all. Terrorists surrounded our village, there were bombs in the street and when we went to town for supplies we never knew what would happen,” he said.

“I'm very happy to return to what I know… to refresh my knowledge,” he added with a tired smile, running a hand over his thinning fair hair.

Sweden's pharmacists' union has complained to the government about long delays in certifying an estimated 200 to 400 Syrian pharmacists, desperately needed to replace the one in four currently close to retirement.

“There is work here, I know I can work and make a good life,” said Zedan, as his expression gradually darkened.

“Everything would be okay now if we could just find accommodation. We need stability, to be able to focus on work and learning Swedish.”