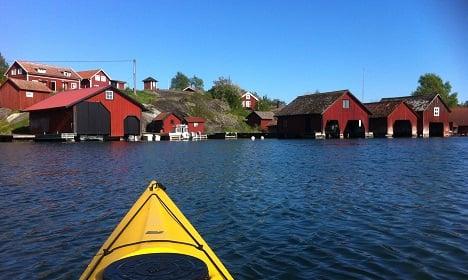 It seems almost no one’s heard of Sweden’s Gryt Archipelago – and island resident Niklas Persson likes it that way.

“There are way too many people in the summer,” he remarks. “Some 200 tourists come to the island.”

Two hundred may not sound like a lot, but on a normal day Niklas and his wife Lina are two of just 11 inhabitants on the secluded island of Harstena.

I’ve joined Lina and Niklas for fika in their home on the island. Summer rain patters softly on the window, obscuring the vibrant greenery outside. As we sip fresh coffee, one of the family’s six dogs nuzzles her cold nose against my hand.

The Perssons have lived on Harstena for a decade, but their connection to the island is centuries old.

”My family has always lived here,” Niklas explains. “This was an old fishing village from the beginning, and my ancestors were fishers. It goes way back.”

The first time the name Harstena appears in history is in a 1543 tax roll, but archaeological evidence shows the islands have been inhabited since the Iron Age. And for as long as anyone here could remember, they were fishers and seal-hunters.

”I was a full-time fisher before too, but it doesn’t really pay the bills anymore,” Niklas admits. “So now it’s a little bit of everything. Fishing, hunting, carpentry… We started raising Labradors in 2006 and have one litter each year. And we raise ducks, for hunting.”

At first glance there doesn’t seem to be much to do out here.  Harstena lies 20 minutes by boat from the nearest port in Fyrudden, the gateway to Gryt Archipelago of Östergötland.

But it’s the kind of life many can only dream of: stunning sunsets, balmy summer evenings, fresh fish daily, and the open sea just outside your front door.

”It’s rather isolated,” Lina says. “It’s a perfect place to hang out, chat, BBQ, walk around…”

“Swim, dive off of the rocks, look at the red waterlilies,” Niklas continues.

On a typical weekday morning, the entire family is up and about by 6am at the very latest.

”The school boat picks up the kids at 6:15 every morning,” Lina says. “Then it goes to the other islands to pick up the other archipelago children.”

The Perssons’ two children go to school on the mainland in Fyrudden, and the combined boat (or hovercraft, in the winter) and bus trip is more than an hour each way. But the kids don’t seem to mind:

“They usually just sleep,” Lina says with a chuckle.

Niklas leaves home around 6:20am, and works “somewhere in the archipelago”, hunting, fishing, handling the ducklings, and whatever else needs doing.

“There’s never a shortage of things to be done,” Lina says.

And even though the Perssons live six nautical miles (11 kilometres) miles out at sea, they don’t lack for modern comforts.

“Oh, we just get the groceries delivered,” she assures me as I take another slice of home-baked apple cake. “If we order online on Thursday, it will be delivered on Friday. It’s very convenient.”

In fact, the family orders basically everything online, from food to clothing to medicine.

”The only thing we can’t get delivered out here is alcohol!” Lina laughs.

Of course island life does have complications. There is no doctor on the island, so if something goes wrong, they need to think quickly.

Lina recalls that a friend on another island had a planned Cesarean birth on the mainland ”just to make sure there wouldn’t be any problems”.

In case of real emergencies the Swedish Sea Rescue Services comes out by boat or hovercraft. In one case the family recalls a helicopter being sent from the island of Gotland, 100 kilometres further out to sea.

Still, Lina says the key to life in the archipelago is simple:

I say goodbye to Niklas and Lina for now, heading past the fragrant lilac bushes to the big yellow house on the hill.

“Welcome, come on in!” a grey-haired woman exclaims before I’ve even reached the door. “I’m Gunni!”

She’s an amiable island amazon, a sea-farer from birth, with a face gracefully weathered by years of sun and sea breezes. An unmistakable gleam of mischief twinkles in her eyes and, to be frank, she has the merriest smile I’ve ever seen on the face of a Swedish stranger.

The Lindkvist family are the hosts of Harstena. Gunni and Kenneth, and their son Magnus are the force behind the Harstena Tourist Services – which manages everything from advertising and helping tourists get there to actually building quaint red cottages where tourists can stay.

“We would have never come up with the idea if we lived in Stockholm,” Gunni says with a wink as we sit down in the cosy, old-fashioned kitchen.  ”Then we would just go out in the archipelago ourselves on the weekend, kayaking with a guide.”

But out here, they are the guides. Gunni helps with logistics and runs the island restaurant; the family rents out kayaks and liaises with kayak tour organizations to help tourists find the best experiences.

”People come here for kayaking on their own, in groups, moonlight paddling, paddling and then doing yoga on land… all sorts of things,” Gunni says.

“Even winter kayaking for the truly adventurous,” Kenneth adds.

And son Magnus has become a skilled tour group leader – for seal safaris.

I sense there’s something truly special about the Östergötland Archipelago, even if the family has a hard time describing exactly what it is.

“Honestly, we don’t really know what the attraction is,” Magnus confesses. “But there’s definitely something.”

“There’s nothing else like it. It’s the most unique place on the entire east coast,” Gunni informs me decidedly.

Like the Stockholm and Gothenburg archipelagos, Östergötland offers an idyllic selection of small red cottages with seaside views. But it’s more than that.

Kenneth takes a moment to ponder.

We head past the village centre – a clearing with a handful of red cottages – on our way to the family-owned restaurant for lunch, when we run into some tourists.

“I had never heard of this place before,” Mike Dorber of Scotland admits. “It’s not publicized so it’s not on the international radar. But it’s beautiful.”

“The weather here is better this year; it’s not like the west coast. The Gothenburg archipelago is very barren,” Peter explains.

The community may be small, but Harstena is good at what it does. We soon feast on a mouthwatering lunch carefully prepared by Gunni that features freshly-caught perch, penny bun mushroom sauce, and arugula salad with green onions.

“It’s all from right here on Harstena,” Gunni grins. “We use whatever we can.”

The family invites the Scottish trio in for coffee, and we devour slices of homemade rhubarb pie as Gunni and Kenneth shamelessly try to convince the kayakers to rent one of their cottages for the night.

“No one can say we’re not hospitable,” Kenneth quips.

After lunch it’s time for a tour. The Scottish Expedition joins us for a field trip fit for an eager school class. And who wouldn’t be excited? Our next stop is the Blubber Boiler.

Like the Perssons, the Lindkvists have been living on Harstena for generations. And life on the island was once much different as the islanders supported themselves on seal hunting for much of Harstena’s history.

“I grew up on seal meat,” Gunni says. “The meat is pitch black when you fry it. I’d love to eat it again.”

Thousands of seals used to live in the area, and the men of Harstena would row to the rocky outcrops and either shoot, harpoon, or club the seals – sometimes 80 at a time.

Harstena resident Hugo Magnusson in 1954 with a harpoon, and still from a 1947 film about Harstena. Photos: SF/Kulturarv Östergötland

The seal catch was the island's main source of income until World War II, with blubber being boiled down into oil and sold to tanneries on the mainland.

”We stopped clubbing seals in the 1940s,” Gunni explains. “After the war ended there were other ways of making a living, and people started moving to the mainland. When I was a child there were 30 people here, and since then it’s only decreased.”

The seals became endangered in the 1960s, but now the population has begun to recover. These days, you’re almost bound to see one on a kayak trip, Gunni says.

“They’re quite curious. You can call after them and they’ll pop their heads up.”

The boilers from 1911 are still here in a red-painted shed on the shore, along with a massive rowboat. And Gunni’s the old school house is now a museum.

As the clan of kayakers sets off onto the water again, I prepare for my own trip back to the mainland in the Lindkvists’ sturdy old boat.

”Maybe that’s what makes Harstena so special after all,” Gunni muses. “The isolation. On the mainland even small towns are affected by the big highways running by them now. But here we are still isolated. We still have our own culture.”

In some paradoxical way, the isolation seems to make the archipelago more welcoming.

”On other islands you might be chased away, spurned by the inhabitants,” Kenneth says. “But here we welcome visitors.”

Indeed, it seems not much has changed in Harstena in the past 50 years. Gunni and Kenneth are still here, and they still fish and live off of the land. The water still laps at the shore, the traditional red painted houses still stand stout, the seals still bark nearby, the gulls cry in harmony, and the sun still shines when the clouds part.

“That’s how life is here,” Kenneth says. “We live off of nature, and nature gives us what we need. That’s Harstena.”

This article was produced by The Local in partnership with Visit Östergötland.