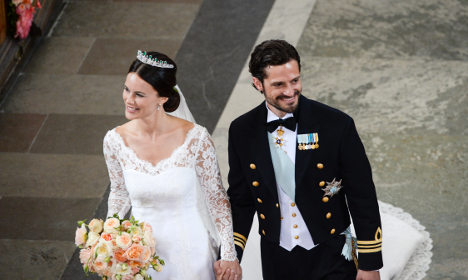 Prince Carl Philip and Princess Sofia melted hearts all over the world when they walked out of church on Saturday to the tune of a gospel-themed performance of Beethoven's 'Joyful, Joyful'.

Swedish musician Anders Neglin was credited for the praised arrangement, which saw some of Europe's top royals clap along as the Swedish royals walked down the aisle.

But US composer Mervyn Warren, who wrote a similar arrangement for 1993 movie Sister Act 2, starring Whoopi Goldberg, refused to let himself get carried away by the wedding joy.

Instead, the musician accused Neglin of plagiarism, writing on Twitter: “So, my arr. 'Joyful, Joyful' was performed at Prince of Sweden's wedding – but some a-hole Anders Neglin takes credit.”

So, my arr. “Joyful, Joyful” was performed at Prince of Sweden’s wedding—but some a-hole Anders Neglin takes credit: pic.twitter.com/qLHZowJ4VK

Neglin did not want to comment when asked by Swedish newspaper Expressen. But Stefan Forsberg, head of the Royal Stockholm Philharmonic Orchestra, who organized the wedding's musical programme, hit back at Warren on Tuesday.

“This is a completely new arrangement by Anders which worked very well, we think. As far as I know Warren hasn't written any arrangement that includes the violin, cello, two French horns and timpani – and that's what this arrangement was written for,” Forsberg told Expressen.

“If Warren finds out that it is these instruments he will understand that it is very far from what he has arranged,” he added.

However, when a Twitter user made the same argument to the US composer on Tuesday he replied: “Someone doesn't understand the difference between arrangement and instrumentation.”

And in fact, Warren was not alone in finding the unconventional wedding exit march similar to Sister Act 2, the sequel to comedy Sister Act about a group of singing nuns embroiled in a mobster conflict.

And a Swedish entertainment journalist commented: “Hi, I can only think of 'Sister Act 2'.”

Sweden's Carl Philip, 36, and Sofia, 30, married in a lavish ceremony in Stockholm on Saturday. The wedding was attended by royals including Britain's Prince Edward, Belgium's Queen Mathilde and Princess Takamado of Japan.