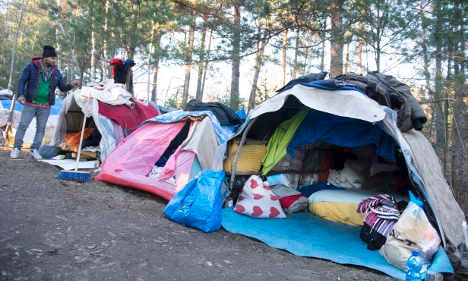 Romanians camping in Stockholm. Photo: Fredrik Sandberg/TT
Fafo's report contradicts numerous reports in the Swedish media in recent months which have suggested that Roma people are being trafficked to the Nordics.
The organization — which is based in Norway — interviewed 1,269 homeless Romanians (most of whom were ethnic Roma) in Oslo, Stockholm and Copenhagen last year.
Its subsequent publication “When poverty meets affluence” was released this week and concluded that there were no signs that criminal groups had influenced their moves to the region.
“We’re very certain that the beggars are not in any way part of organized crime,” Anne Britt Djuve, one of the researchers behind the study, told The Local Norway.
“They know each other and they travel in family networks and community networks. It’s not being organized by any third party.”

A beggar in the Swedish capital. Photo: Jan Eriksson/TT
As well as interviewing homeless Romanians on the streets with a set questionnaire, Fafo also arranged in-depth qualitative interviews, and visited Romania to carry out field surveys.
“We don’t think that all of them would have been able to deceive us to such an extent,” Djuve said.
As migrants from elsewhere in the European Union, Romanians can easily travel to Sweden as tourists under the EU's right to Freedom of Movement, without the need for a visa or a work permit.
Separate research by Swedish broadcaster SVT in April suggested that the number of EU migrants from Romania and Bulgaria had more than doubled in the preceeding 12 months, to around 4,000 people.
Faro's report revealed that most homeless beggars in Scandinavia's capitals normally travel to the region in minibuses, often borrowing the money to finance their journey, either from family or from the minibus drivers.
“Their families in Romania are extremely poor so this can make a lot of difference,” added Djuve.
It was not, however, enough money to attract the interest of organized crime groups, she believed.
“This is not enough for a criminal network. It’s not worth the effort.”
READ ALSO: Meet Northern Sweden's frozen Roma beggars
Fafo's report also suggested strong differences among the Romanian families settling in the region's largest cities.
The Swedish capital tends to attract the most marginalized from mainstream society in terms of their lack of basic formal schooling and work experience, while those arriving in Copenhagen seem to be better educated and less integrated into traditional ethnic Roma groups in the home country. Romanian migrants relocating to Oslo are somewhere in between, according to Fafo.
In Stockholm, 79 percent of Romanian people interviewed by the research group said that they had not completed the obligatory eight years of basic primary education in their home country. 82 percent said that they had never had formal employment in Romania.
The Romanian population in the Swedish capital also reported having more experience of begging in other parts of Europe — most notably Italy — before coming to Scandinavia, compared to those settling elsewhere in the Nordics.