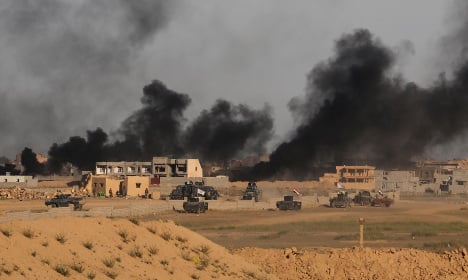 “It is completely unacceptable that Swedish citizens are travelling to [join] IS, financing the organization, or fighting for it,” Justice Minister Morgan Johansson and Home Affairs Minister Anders Ygeman wrote in a joint article in the Dagens Nyheter newspaper.

“We have a responsibility for what our citizens do both here at home and in other countries,” they wrote.

“People who live here and who have chosen to join IS can constitute a serious threat upon their return. Criminalization is of course not the only way of preventing this, but it is an important part of anti-terrorism measures,” they said.

Johansson told reporters at a press conference that he had commissioned a report on the possibility of introducing such legislation, which was to be submitted to the government in June 2016.

In a bid to stem the flow of foreign jihadists, the UN Security Council adopted a resolution last year requiring member states to adopt laws making it illegal to travel or make plans to travel to a country to join jihadist groups, or to collect funds for recruitment.

Johansson said Sweden hoped to present a separate bill to parliament in a few months that would meet the UN demands.

A government-commissioned report has proposed a maximum two-year prison sentence for those crimes.

In April, Säpo told The Local there was “very little” it could do to stop people travelling to Syria to join al-Qaeda inspired groups, as EU officials estimated up to 6,000 people from across Europe have now fought in the war-torn nation.

It confirmed that at least 150 Swedish residents were known to have been to Syria or Iraq to fight for Isis or other extremist groups, with intelligence suggesting that at least 35 had died in the process.
Days later, Syria’s President Bashar al-Assad told Sweden’s tabloid newspaper Expressen that he believed some of “the most dangerous leaders of Daesh and Isis in our region are Scandinavian”.
More than 215,000 people have been killed in Syria's four-year war, which is increasingly dominated by jihadist groups. The fighting started after pro-democracy protests against President Assad's government became violent and the country slid into civil war.