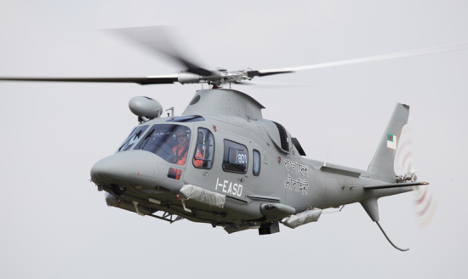 An Agusta Westland helicopter. Photo: Wikicommons
The move followed an investigation by Swedish public broadcaster SVT's programme Uppdrag Granskning earlier this year, which revealed that the deal between the state-run maritime administration and AgustaWestland, an Anglo-Italian manufacturing company, had been set up using private Hotmail accounts.
In late April, reporters claimed that the Swedish Maritime Association (Sjöfartsverket) had scored the one billion kronor ($120 million) deal with the firm, which is owned by Finmeccanica, weeks before announcing a public tender for the project.
One of the messages discovered by the programme includes a comment by the vice director of the organisation stating that she is prepared to travel to Italy to “make a handshake” on the deal.
Late on Wednesday it emerged that police from Sweden's National Anti-corruption Unit (Riksenheten) had raided the association's offices in Norrköping, south of Stockholm, although prosecutors refused to give further details about the investigation.
“Since there is reason to believe that a crime that falls under public prosecution has been committed, I have today decided to initiate an investigation,” prosecutor Roger Engstedt told Uppdrag Granskning the following day.
The Swedish Maritime Association confirmed on its website that a raid had taken place.
“We welcome the initiative and are now cooperating with the prosecutor,” it read.
By Thursday evening AgustaWestland had not commented on the investigation.
Url copied to clipboard!