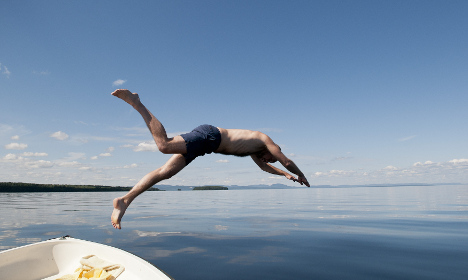 Remember not to drink before you do this. Photo: Johan Willner/imagebank.sweden.se

Drinking and going skinny dipping in one of Sweden's many lakes are two popular traditions in the Nordic country. But there is a dark side to this summer ritual.

Last year saw 137 Swedes die from drowning, including 116 men, 21 women and five children, according to the Swedish Life Saving Society (SLS). Six out of ten had been drinking alcohol.

The Stockholm Men's Synchronized Swimming Team have now joined forces with Swedish insurance company Trygg-Hansa and SLS to highlight the dangers of bathing under the influence of alcohol for the so-called “Don't Drink And Dive” campaign.

“The group that's the most affected are people like me: male adults,” Sam Victorin, chairman of Sweden's only synchronized swimming team for men, told The Local.

“I'm not sure why, but I suppose grown men are overconfident and just bad at listening. But that's just my own theory,” he added.

In a video, the three-time world champions try – and fail miserably – to recreate one of their winning routines after getting boozed-up on large quantities of alcohol.

Many Swedes are likely to use this Friday's Midsummer Eve holiday as their first opportunity to jump into the sea for the first time after the long winter. However, this often happens after consuming not insignificant quantities of traditional snaps.

“Given that every second person that drowns has alcohol in their blood, we are now trying to get people to see the risks of swimming intoxicated. If we assume that Swedish people swim in the summer time and also sometimes in winter – in connection with a sauna – it means that nearly 10,000 Swedes will swim drunk, every day, according to our survey,” Johan Eriksson, head of communication at Trygg-Hansa, said in a statement.

One in ten Swedes have gone swimming while heavily intoxicated at some point in the past two years, according to a recent survey by the Swedish firm. In the same poll, one in five admitted to going for a dip after consuming “a little” alcohol.

“I am convinced that this film will make people think twice before drinking and swimming. The insight can save lives this Swedish summer,” SLS general secretary Karin Brand said.