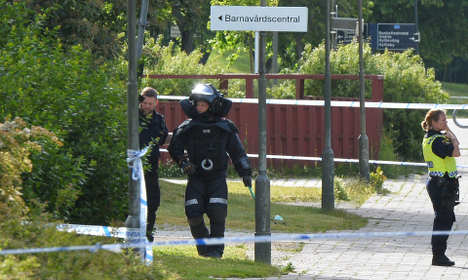 Police have cordoned off a large area of the Kroksbäck neighbourhood. Credit: Johan Nilsson/TT

Two grenades were thrown against the block in Kroksbäck in Malmö but neither device exploded.

Residents of the block were evacuated to a nearby school, police cordoned off a large area of the neighbourhood and a police bomb squad was sent to deal with the grenades.

Earlier this month, a convenience store in the multicultural neighbourhood was the target of an explosive device and in 2010 at least three people, one a 16-year-old boy, were shot in apparently random incidents in the area.

The police have so far been unable to speculate as to the motive for Saturday's grenade attacks.