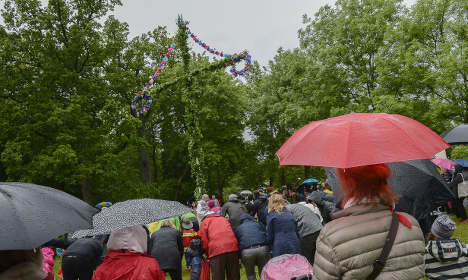 The rain and cold had a calming effect on most parts of central and southern Sweden. Many precincts reported an unusually quiet Midsummer with few interventions. Police in Stockholm compared it to a regular Friday night.

“We have had a high staffing but it has been slower than we had expected,” said Anna Kling, a spokesperson for Stockholm police.

Torbjörn Lindqvist, duty officer for Norrköping police added: “It's not so tempting to sit out and party and drink when it's eleven degrees outside.”

However, in northern Sweden, the weather was a little better. At Norrfällsviken outside Kramfors, several hundred people gathered for the celebrations. Shortly before dawn, a brawl broke out between around 20 revellers. When a police officer tried to intervene, he was attacked.

There were, however, no arrests.

Police also reported two road deaths, one just outside Strömsund, in the north, and another in Värnamo, in the south.

There was also a reported rape on the island of Öland in the far south. Five men in their twenties have been arrested.