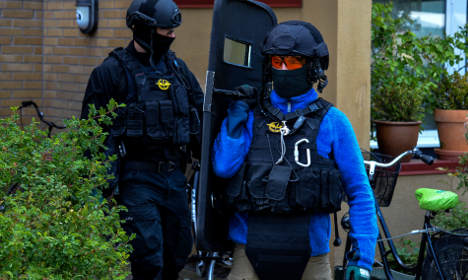 One person was taken to hospital with non-life threatening injuries after a Midsummer Day shooting in the Söderkulla square in Malmö. A 24-year-old man was arrested on suspicion of attempted murder after he reportedly handed himself over to the police on Monday afternoon.

No new details have emerged about two hand grenades being thrown at an apartment block in the southern Swedish city on the same day, June 20th.

Officers are also investigating a separate shooting on Ramel's street in the Rosengård area of Malmö on Monday morning. No one was believed to have been injured.

Malmö has experienced growing violence in recent years. Some of its inner-city areas and suburbs have a reputation for gun and gang-related crimes as well as race-related violence between different immigrant groups.

As a result, the force has stepped up its presence in known trouble-hit areas such as Rosengård and Seved, where around 30 people believed to be from criminal backgrounds are being tracked by officers.

“The availability [of weapons] is something which worries us a lot, that it really is this simple to get hold of them,” Patrik Johansson of the Malmö police told Swedish news wire TT on Monday.

Although police were unable to comment on this weekend's incidents, they have in general been able to link many of the shootings and explosions.

“We have seen certain connections,” Ewa-Gun Westford, police press spokeswoman, told TT, but added that not all the incidents were related to each other.

“We're talking about easily offended individuals who, when they perceive themselves to be offended, take action to protect their honour. It could be a car deal that has gone awry, unpaid narcotics debts or something really trivial like someone spending too long talking to someone else's girlfriend,” he told TT.

“Today, the gang environment is…I don't want to exactly call it the Wild West, but something in that direction,” Amir Rostami, a leading authority on Sweden's organized crime groups told The Local after two people died in a shooting in the suburb of Hisingen in March.