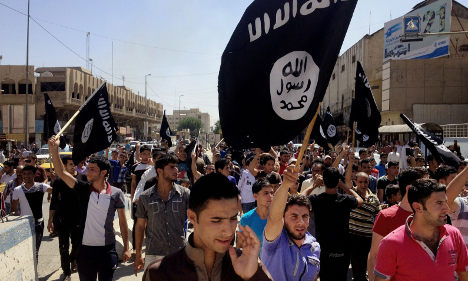 A file photo of Isis supporters in Baghdad in 2014. Photo: TT

Investigators working for the security service told Sveriges Radio that there had been a rise in people taking trips to the Middle East to fight alongside terror organisations such as Isis (also known as IS) over the last year, with growing numbers of visits funded by loans taken out in Sweden.

Martin Frimansson, an expert on terrorist funding at Säpo, explained that while some Swedes had borrowed money from banks or using Swedish credit cards, others had paid for their travel using SMS loans (money borrowed via text message from private companies) or made their way to Syria and Iraq using cars rented in Sweden.

According to Frimansson, a “clear majority” of trips were made possible due to loans, although he did not give any specific figures.

He suggested that some Swedes were also taking out loans in order to raise their status within Isis or other terror groups.

“It could be that if you have a car and money…you automatically become a team leader. If you have no money when you arrive, no car or anything – then maybe you’ll be the ambulance driver,” he said.

By law, credit companies and banks are required to adhere to a range of measures designed to prevent the financing of terror activities, but according to Säpo the trend for Swedes borrowing money for suspect trips to the Middle East suggests that much more needs to be done.

The security service is calling on lenders to file reports on people who are failing to repay their loans more quickly and to be stricter about who they lend money to in the first place.

“They are the first hurdle to stopping terrorist financing. It is a big responsibility,” said Frimansson.

In April, Säpo told The Local there was “very little” it could do to stop people travelling to Syria to join al-Qaeda inspired groups, as EU officials estimated up to 6,000 people from across Europe have now fought in the war-torn nation.
It confirmed that at least 150 Swedish residents were known to have been to Syria or Iraq to fight for Isis or other extremist groups, with intelligence suggesting that at least 35 had died in the process.
Earlier this year, Syria’s President Bashar al-Assad also told Sweden’s tabloid newspaper Expressen that he believed some of “the most dangerous leaders of Daesh and Isis in our region are Scandinavian”.
More than 215,000 people have been killed in Syria's four-year war, which is increasingly dominated by jihadist groups.
The fighting started after pro-democracy protests against President Assad's government became violent and the country slid into civil war.