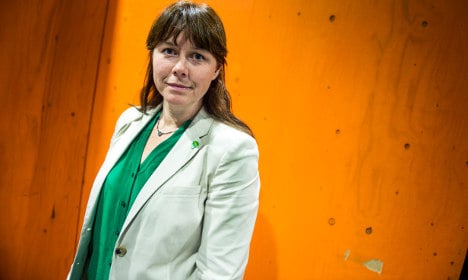 The Green Party co-spokesperson, who is also Sweden's environment minister and deputy prime minister, was accused of hypocrisy last autumn for using an environmentally hazardous anti-fouling paint to coat her house boat, which she lives on part-time with her Swedish 'sambo' (a Swedish word for co-habitant) Fredrik Karlsson.

The paint, 'Sigmarine 290', which contains 37 weight percent of the harmful substance copper oxide, was effectively banned in 1996 by the Swedish Chemicals Agency (Kemikalieinspektionen) for leisure boats in accordance with an EU directive.

The move did allow some leeway for certain boats that had already been painted in the substance prior to 1996.

In an interview with Swedish boating magazine På Kryss earlier in June, Romson suggested that this loophole applied to her boat, even though she had applied fresh paint after this date.

But the Swedish Transportation Authority (Transportverket) rejected the minister's interpretation of the exception on Monday.

“Recreational boats are covered by the ban. And leisure boats are those used for sports and leisure purposes. What Åsa has got stuck on are the engineering requirements,” Anna Pettersson, head of the Swedish Transportation Authority's environmental department, told the TT news agency.

She said that the loophole proposed by Romson was only meant to protect customers who had already used the anti-fouling paint at the time and could not be applied retroactively.

Romson's press secretary Helena Hellström Gefwert told TT that the minister did not want to answer any more questions about the toxic bottom paint and added that Romson and her partner had been under the impression they had acted within the scope of the law.

“It has never ever been the intention to use illegal paint. They always look for options that are better for the environment,” she said.

The Green Party, which together with the Social Democrats form part of Prime Minister Stefan Löfven's centre-left coalition government, has previously criticized the use of toxic anti-fouling paints.

A statement on the party's website read: “Bottom paint has been discussed for many years and certain substances are prohibited. But all anti-fouling paints contain various degrees of toxins and nowadays good methods of coping with summer without these paints exist, by for example washing the hull of the boat regularly. Apart from the fact that it creates a more non-toxic Baltic Sea (…) it also makes it easier for boat owners to avoid handling the toxic paints.”